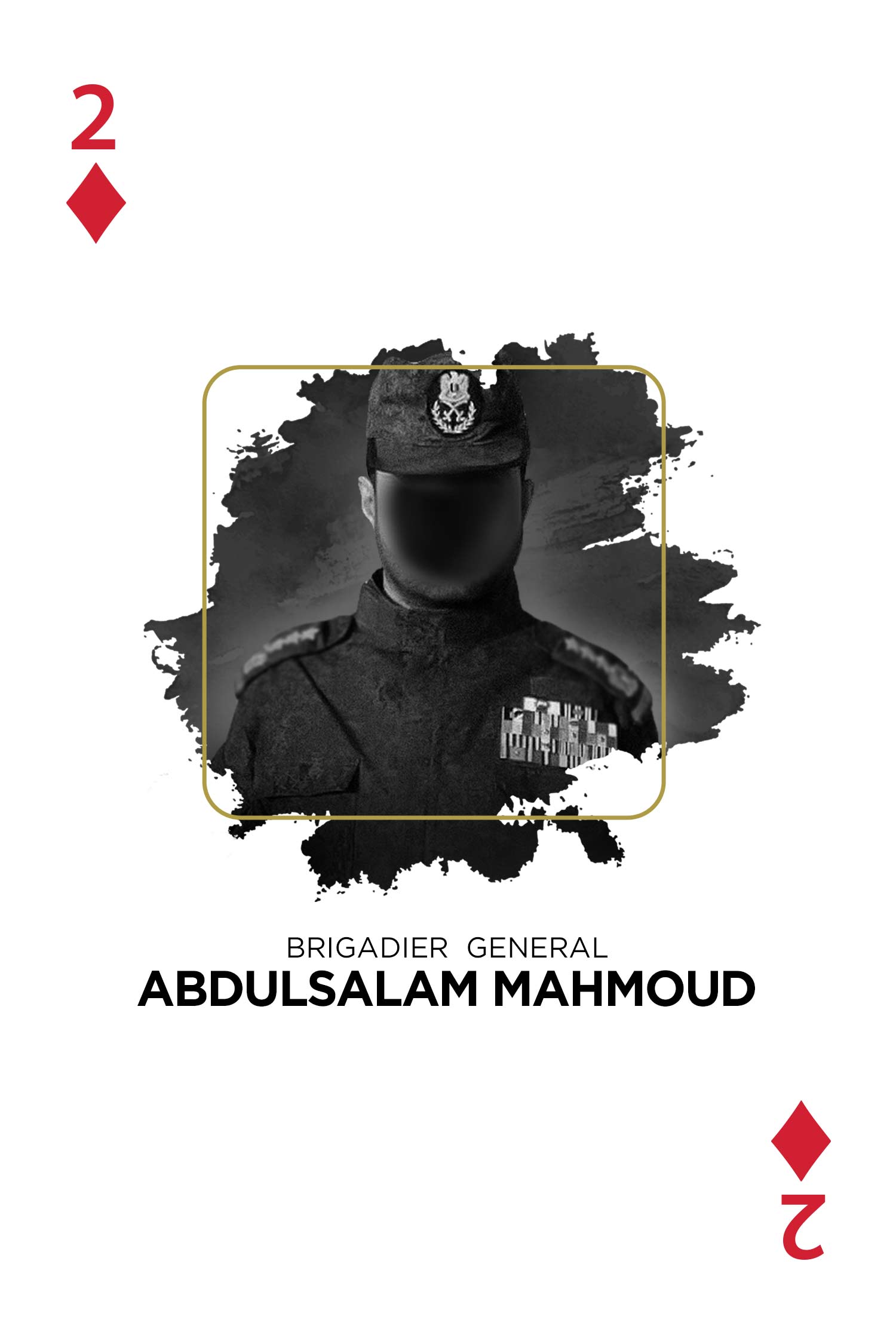 When peaceful protests broke out in March 2011, Brigadier General Abdulsalam and his deputy, Brigadier General Nazih Mulham, took responsibility for investigating prisoners in the Air Force Intelligence Directorate, whose staff numbered around 388 members at that time. The two generals, Abdulsalam and Nazih, oversaw torture and executions of the prisoners, who were sent from all Syrian provinces to the Investigations Branch. The following also participated in the violations: Brigadier General Salam Daghestani, Major Suhail al-Zamam, Major Tareq Suleiman, and Captain Bassem Mohamed.

This group comprised one of the worst interrogation teams, to the extent that the Air Force Intelligence Investigations Branch in Mezzeh (led by Brigadier General Abdulsalam Mahmud) gained a major reputation for torture and executions, with its most prominent victims being two children under the age of three years old, Hamza al-Khateeb and Tamer al-Sharei, according to the testimony of Afaq Ahmed, a defected member of the Air Force Intelligence Directorate.

The Human Rights Watch report issued on 15/12/2011 under the title, “By All Means Necessary! Individual and Command Responsibility for Crimes against Humanity in Syria[1],” carried details of the violations committed by the Special Operations branch in the Al-Mezzeh Airbase. According to the testimony of an Air Force Intelligence defector called “Omar,” after the Saida operation[2], Air Force Intelligence officers brought back 160 detainees. Omar was responsible for organizing their transfer to the Investigative Branch of the Air Force Intelligence and thus had access to the name list. He said that the detainees were held at the detention facility at the Mezzeh airport. Eventually all but two of them were released after the crime of torturing and killing the child Hamza al-Khateeb was revealed. Omar said these and other detainees whom he saw both during his service and during his detention were repeatedly tortured in detention at the Mezzeh facility and in two other detention facilities run by Air Force Intelligence, in each of which he spent time. He said that the methods of torture that he observed used by interrogators at the Mezzeh facility included prolonged beatings with sticks and lashing with whips; suspension of detainees by their hands from the ceiling, at times for hours or even days; use of electric cattle prods and an electroshock machine with wires attached to different parts of detainees’ bodies; as well as food, water, and sleep deprivation. According to Omar, Brigadier General Abdulsalam Fajer Mahmud, as the head of the Investigative Branch of Air Force Intelligence, was in charge of all three detention facilities.

Brigadier General Abdulsalam Mahmud’s name appeared a number of times in the Human Rights Watch report issued in 2012 under the title, “Torture Archipelago: Arbitrary Arrests, Torture, and Enforced Disappearances in Syria’s Underground Prisons since March 2011[3]” on pages 49 and 50 of the report, where an officer who defected from the Air Force Intelligence called “Rami,” who was detained there, said: “I saw people being tortured there both when I was detained and when I worked there. The mildest form of torture is hitting people with batons on their arms and legs and not giving them anything to eat or drink. Then they would hang the detainees from the ceiling by their hands, sometimes for hours or days. I saw it while I was talking to the interrogators. They used electric stun-guns and an electroshock machine, an electric current transformer. It is a small machine with two wires with clips that they attach to nipples and a knob that regulates the current. In addition, they put people in coffins and threatened to kill them and close the coffin. People were wearing underwear. They pour hot water on people and then whip them. I’ve also seen drills there, but I’ve never seen them being used. I’ve also seen them using martial arts moves, like breaking ribs with a knee kick. They put pins under your feet and hit you so that you step on them. I also heard them threatening to cut off the detainees’ penises.”

There is a large amount of evidence indicating Brigadier General Abdulsalam Fajer’s involvement in the “Caesar[4]” case, which documented cases of killing under torture in the Investigations Branch, which was headed by Brigadier General Abdulsalam, as well as in the Human Rights Watch report, “If the Dead Could Speak: Mass Deaths and Torture in Syria’s Detention Facilities[5],” which documented killings carried out by Syrian intelligence agencies, and in the Amnesty International report, “It Breaks the Human: Torture, Disease and Death in Syria’s Prisons[6],” which addressed the systematic means of torture, as well as the cases of rape which were carried out in the branch, and the blackmail carried out by arresting women and girls in order to press them to admit anything related to their family or to put pressure on their families to hand themselves in, in exchange for releasing these women and girls. In fact, we have seen more than one prisoner exchange between the regime forces in which women and girls are given in exchange for regime officers and soldiers.

One former prisoner in the Investigations Branch in Mezzeh in 2013 spoke, in a testimony obtained by Pro-justice, of the violations carried out there: “I spent 51 days in this prison moving between three solitary cell and one bigger cell. We were 26 prisoners in the individual cells which are fashioned for one prisoner and had an area of 2 X 2.5 meters. We were in just two classes. Half of this number slept standing and the other half slept squatting. In this cell there was a father and his son, and in the neighboring cell there were his other sons. That morning we woke to the death of the father, and after two nights of the brutality his son lived in the same cell, he died as well! … There were also children imprisoned, 18 years old, 13, and 14. We were always waking up to their hysterical screams at night, “I want my mother!” In this prison there were women suffering from all forms of torture and sexual assault. In this prison, brothers were forced to sodomize brothers. In this prison, there were no prisoners who were not deformed… Due to the dirt and the filth, and the lack of cleanliness and water, the wound would be infected and fester alarmingly. In this prison, the prisoner wanted to die a thousand times inside this place, and not be taken to the Hospital 601 in Mezzeh, which was a total slaughterhouse. In this prison, we were allowed to go to the bathroom twice a day and in the few seconds; otherwise we got a devil’s wrath. They violated our privacy and we were there with our own waste in the bathrooms. In one body, there were 130 wounds which we saw with our own eyes when he showed it to us. These wounds were not due to the beatings but the filth inside the prison.”

Brigadier General Abdulsalam has been subject to European [7]sanctions[8] and British [9]sanctions[10] since 2011, due to his direct oversight of the violent operations which were carried out by members of the Air Force Intelligence against members of the Syrian people. Samantha Power, the former United States representative to the Security Council, also noted his name on a list of the military officials in the regime forces which she said trusted reports had confirmed had carried out war crimes against Syrian civilians in various forms, and whom she promised would be prosecuted in 2016, adding that the United States “The United States will not let those who have commanded units involved in these actions hide anonymously behind the facade of the Assad regime … Those behind such attacks must know that we and the international community are watching their actions, documenting their abuses, and one day, they will be held accountable.” Sources say that up to April 2016, the Air Force Intelligence Directorate issued about 20,000 arrest warrants against Syrian citizens.

[2] An ambush by regime forces in which a number from the security branches and military units participated under the command of Air Force Intelligence, which led to the deaths and arrest of a large number of residents of Deraa province who had gone to break the siege imposed on the city on 29/4/2011.

[4] A photographer in the regime forces who defected and fled with about 55,000 photos of the victims of torture in prisons and torture centers of Syrian intelligence.