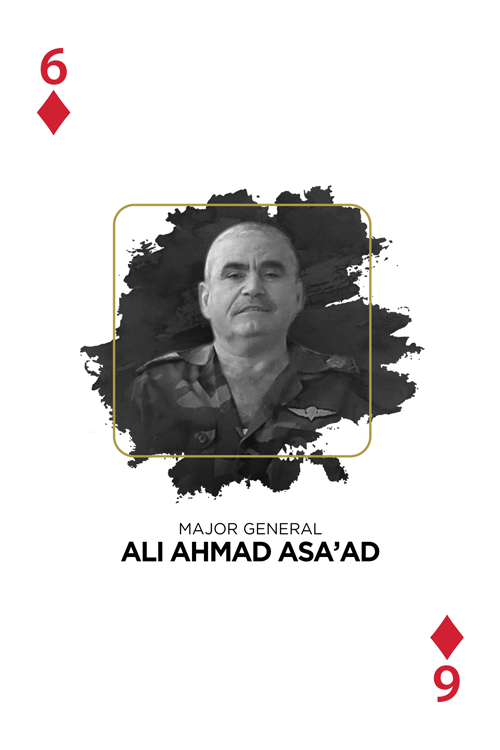 Major General Ali Asaad is considered to be one of the most prominent officers to enjoy the trust of Bashar al-Assad, given his relations with the High Alawite Council.

When the peaceful protest movement broke out in March 2011, Ali Assad was serving in a command position in the 15th Special Forces Division, deployed in Suweida and commanded by Major General Mohieddin Mansour[1].

Given his sectarian background[2], Ali Asaad has committed widespread violations against civilians in Daraa province, where he participated in storming the Lajat area in the northeastern Daraa countryside with groups from the Ninth Division and the Fifth Division. He also oversaw the military operations carried out by Regiment 127 under the 15th Division in Daraa, whose fighters fired directly on civilians.

The Human Rights Watch organization issued a report (15/12/2011) entitled, “By All Means Necessary!: Individual and Command Responsibility for Crimes against Humanity in Syria,” [3]in which it quoted the testimony of a fighter serving with the 3rd Battalion, 127th Regiment, 15th Division as saying: “I was ordered to shoot at protesters many times, but I shot in the air since I knew these were ordinary people and not terrorists. Those who directly ordered us to shoot were Colonel Imad Abass and Major Ziyad Abdel Shaddoud. They said that we were fighting terrorist groups and that we had to get rid of them. They told us to kill anybody who was outside in the street without asking who they were.”

This testimony was confirmed by First Lieutenant Ahmed al-Khalaf, who in a statement of his defection from the 127th Regiment[4] spoke about the criminal practices employed by members of the regiment in Daraa.

In 2013, Major General Ali Asaad was appointed as commander of the 15th Division, where he added to his crimes in the Suweida and Daraa provinces. He is considered directly responsible for all the crimes committed by members of the 15th Division, especially those violations carried out by members of the Hamida al-Tahir checkpoint in Daraa al-Mahata. Given his criminal role in serving the regime, he was appointed in 2016 to be head of the Military and Security Committee in Suweida province, following the governor, Atef al-Nadaf.

In 2017, the 15th Division, under the command of Major General Ali Asaad, participated in the battles of the al-Manshiyeh district, alongside the Lebanese forces Hezbollah, and the Fourth Division. A major dispute occurred between him and Brigadier General Wafiq Nasser, whereby Major General Ali demanded to lead the operations rather than Hezbollah, threatening to withdraw from the fighting. Wafiq Nasser threatened to kill him if he pulled his forces from the area.

In 2018, the 15th Division participated in military operations in Daraa which killed and wounded a number of the province’s residents and ended with the signing of reconciliation agreements with regime forces.

Major General Ali Asaad is considered to be directly responsible for crimes which the ISIS organization carried out in collusion with him in Suweida province on 25/7/2018. This is because, in his role as head of the Military and Security Committee in Suweida, he withdrew weapons from the residents of the eastern Suweida countryside without justification a number of days before the ISIS attack, which allowed the group to commit a massacre in the city and its eastern countryside in a collective killing which took the lives of about 215 people and wounded more than 300, with about 40 people kidnapped, including women and children.

Major General Ali Asaad was not content merely to withdraw arms from the area’s residents, but was also complicit in carrying out the crime through preventing support being sent from regime forces to the villages stormed by ISIS members until late on 25/7/2018.

[1] He was later killed in battles for Jisr al-Shughour.