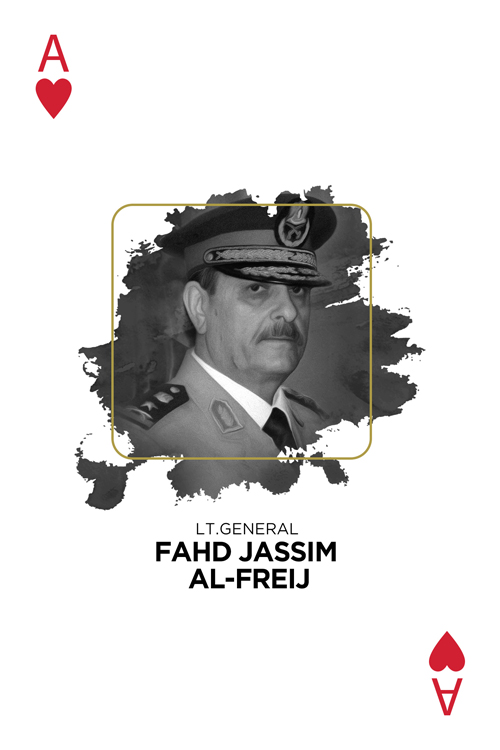 Lieutenant General Fahd Jassem al-Freij was born in 1950 in the village of al-Rahjan in the eastern Hama countryside. He graduated from the War College with a specialization in Armor in 1971, then rose in military rank until he was appointed Vice President of the Joint Chiefs of Staff in 2005. He was promoted to Lieutenant General in 2009.

Upon the killing of Lieutenant General Dawood Rajha in the Crisis Cell Explosion on July 18, 2012, Lieutenant General Fahd Jassem al-Freij was appointed Minister of Defense. He remained in his position until his dismissal on January 1, 2018. Until then, he executed all of the tasks that were delegated to him, including pursuing wha the described as “The remainders of the terrorist gangs,” with the understanding that the country faced a “Zionist-American conspiracy” that aimed to undermine its stability. 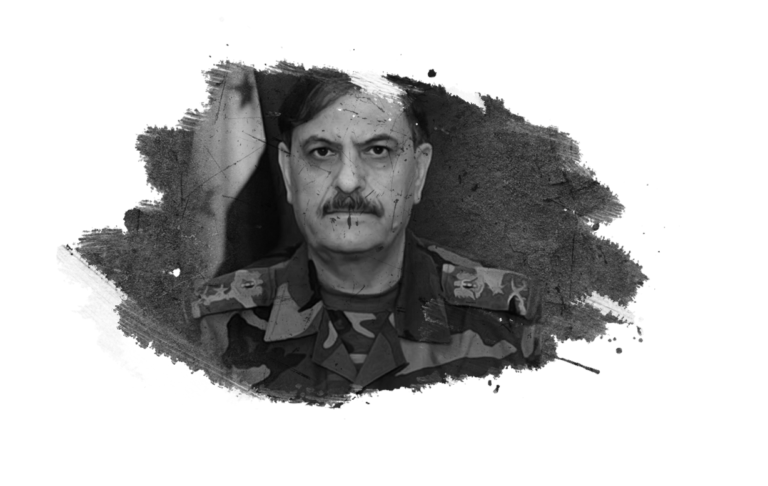 Lieutenant General al-Freij is considered directly responsible for all of the crimes committed by units of the Syrian Army, given his position as Vice President of the Joint Chiefs of Staff for the Army and Armed Forces since the beginning of the Syrian revolution on March 15, 2011, including August 2011, when the Special Forces committed horrifying crimes against civilians in Dara’a, Idlib, and Hama under his command.

A Human Rights Watch report published on December 15, 2011 entitled “By All Means Necessary! Individual and Command Responsibility for Crimes against Humanity in Syria,” quoted the testimony of a defector from the army under the name “Habib.” [This testimony] directly follows Lieutenant General Freij during an operation that took place on April 25, 2011 in Dara’a, in which his unit followed orders from Brigadier Ramadan Mahmud Ramadan, the leader of the 35th Special Forces Regiment, to open fire on civilians.

The report also cited a person under the name “Salim,” a defected officer from the 46th Special Forces Regiment, who stated that he witnessed the striking and insulting of detainees in the camp of the Idlib vanguard, which was used as a center and headquarters for the Special Forces. He confirmed that, in the period between April and July of 2011, “Intelligence [forces] began to gather detainees in the camp, usually between 10 and 30 individuals, around 9 or 10 PM, after each protest (and this happened daily). The detainees lined up, blindfolded, and were forced to sit on their knees, and they were hit. The security forces cursed them and placed their feet on their heads. That happened outside of the building, in front of my office. The detainees were hit as they waited for Lieutenant General Fahd Jassem, who oversaw operations in Idlib, to prepare and examine them. Intelligence [forces] would gather some younger soldiers – including men from my unit – tell them that the detainees were terrorists, and force them to hit them. Lieutenant General al-Freij would curse the detainees because of their participation in the demonstrations, then take them to the nearby prison. The prison is under the guard of soldiers from my unit, and I would sometimes go there. They placed the detainees there at night, in a cell of six or seven meters, without food or water.” 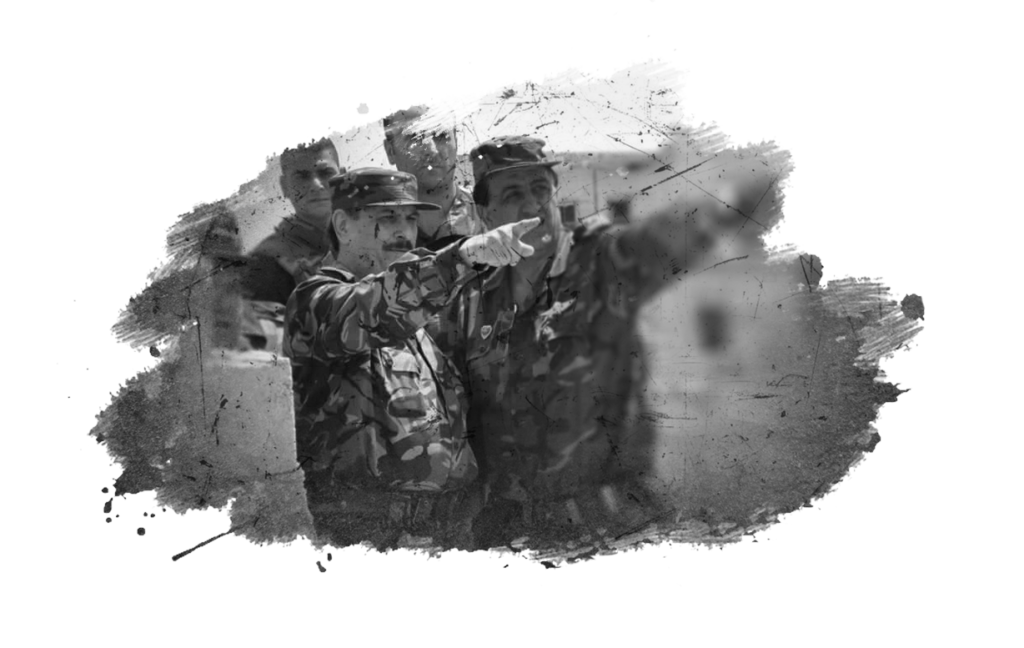 Lieutenant General al-Freij was also considered directly responsible for all of the crimes committed Syrian Army units, given his position as president of the Joint Chiefs of Staff of the Army and Armed Forces, from August 2012 until he took the position of Minister of Defense on July 18, 2012.

He is considered directly responsible for all of the crimes committed against the Syrian people from July 2012 through the date of the end of his service on January 1, 2018, through his work as the Minister of Defense, when he took up the task of coordinating between the supreme leadership of the army and armed forces, and among the Joint Chiefs of Staff of the Army and Armed Forces, through his issuing of orders to deploy units and sections of the army, appended with his signature. He holds responsibility for all of the blood that has been spilled and all of the destruction that has befallen most of the cities and regions of Syria. His responsibility for these crimes is no less than that of Bashar al-Asad, or Lieutenant General ‘Ali Ayyub, who preceded him in his office. Lieutenant General Fahd Jassem al-Freij is currently out of service, but his crimes against the Syrian people remain.

During his service, Lieutenant General al-Freij carried out the conscription of a large number of the al-Hadidayn clan, to which he belongs, to help the Syrian regime repress the protests in the province of Hama. Likewise, his relative Major General Juma’a al-Jassem, who worked in the position of Director of the Artillery and Rocket Administration, holds responsibility for a large number of massacres committed against the Syrian people. 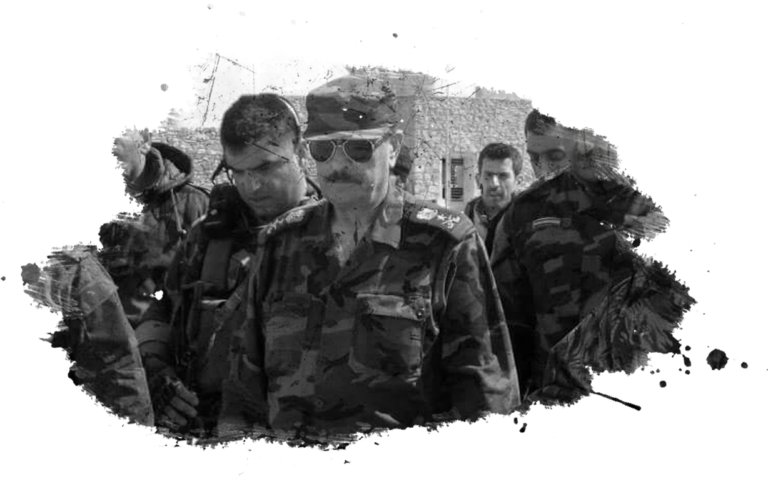 Based upon this bloody record, Lieutenant General Fahd Jasseum al-Freij was placed on the British,[1] European,[2] and Canadian[3] sanctions lists because of his direct responsibility for repressing demonstrators, and the crimes that have been committed against civilians.

Sources indicate that his dismissal from the army resulted from Russian forces’ urgency [to deal with] corruption cases connected to him and his sons, as he benefitted from the presence of a legal gap in the law concerning military service, paragraph ح of article 25 of which allows “Excluding that deemed suitable for exclusion from reserve service by the general leadership,” although this paragraph was fully invalidated following a Russian request in July of 2017.

[1] He is listed number 47 on the British sanctions list.

[2] He is listed number 57 on the European sanctions list.

[3] He is listed number 62 on the Canadian sanctions list.