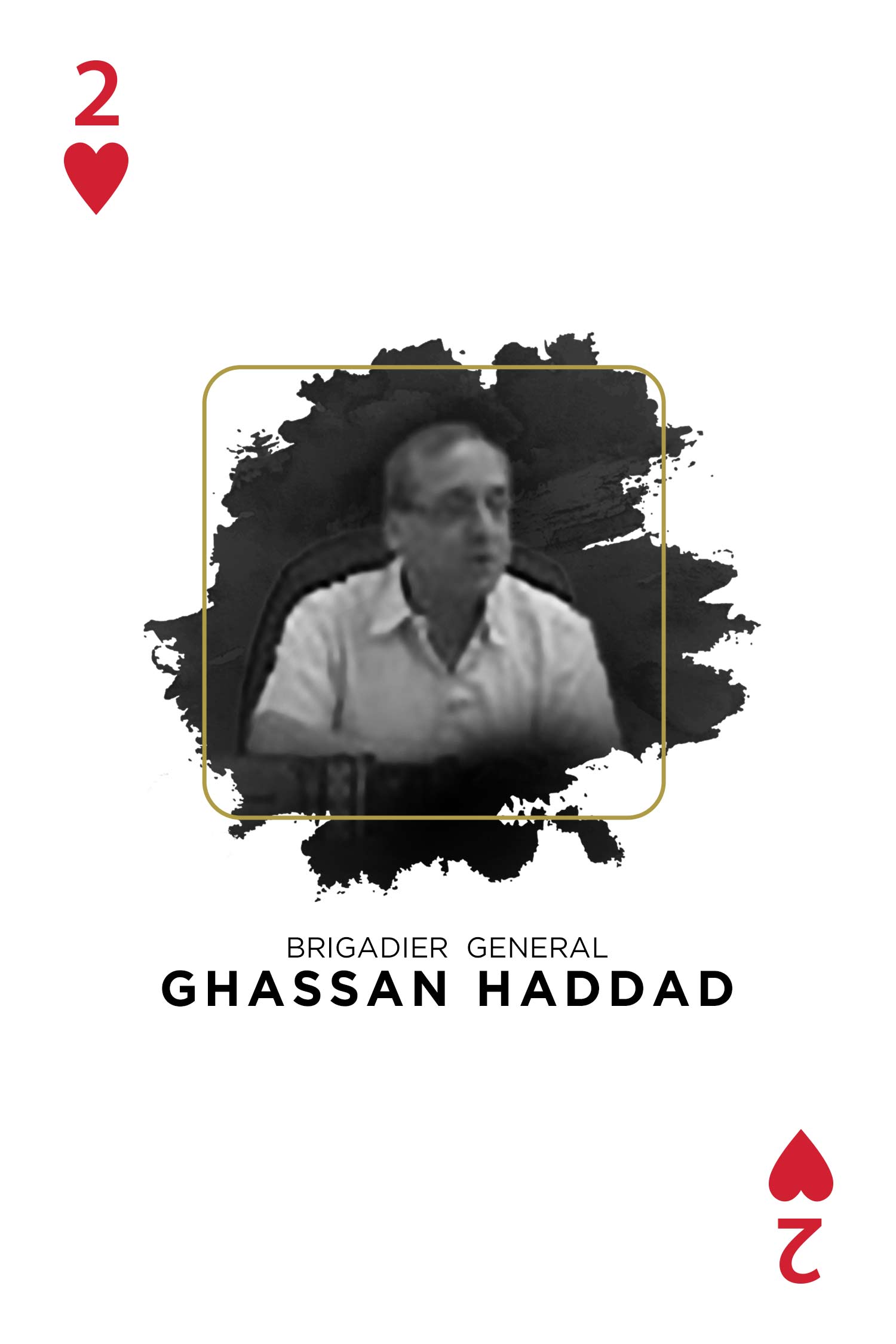 Previous positions of service
1- Director of the Military Hospital 601

A trained medical practitioner and director of the infamous 601 Military Hospital, Brigadier-General (Dr) Ghassan Haddad is a key perpetrator of crimes against humanity on behalf of the regime. Together with Colonel Taha al-Asad, Colonel Hussein Mallouk, and Warrant Officer Mohammed Dayoub, Dr. Haddad and his medical staff aided the transformation of the military hospital into facility for the widespread abuse of opposition members and civilians. This team oversaw the torture and killing of activists and protesters who were taken to the facility for medical treatment or during times of emergency.

Haddad and his team also supervised the transfer of activists back to regime security branches for torture and/or execution. He also played a role in covering up the crimes of the security branches by fabricating causes of death, often falsely stating that torture victims had died of “heart attacks.” This was highlighted recently when the regime began informing families of the deceased through the civil registry.

The crimes of Dr. Haddad have been documented through video interviews[i] or written testimonies from defectors and victims who survived their experiences at the hospital.

According to one testimony, “Abu Sakhr,” a former hospital employee, said: “The shabeeha brought detainees from different branches. Most of them (the detainees) were shabby. In the first year (of the revolution) detainees were brought to certain rooms in the hospital before they were designated a separate building later on. Doctors, nurses, soldiers, and even cleaners contributed to the torture continuously. One of the nurses’ additional tasks was to move the detainees who died under torture to the morgue. They were forbidden to give the detainees any medication, food, or water.”

Abu Sakhr said: “Nurses were constantly busy moving about 30 bodies (a day) to the morgue.” He added, “We would move a body to the morgue and return only to find out that a new detainee had died.” According to the witness, “90 percent of these detainees would die mostly from kidney failure resulting from the beating on the kidney area.”

Abu Sakhr revealed that there was a tunnel in the military hospital that connected the main center with a newly constructed building where the morgues were located. Victims would be transported through these tunnels. “The detainees would be kept naked throughout their stay in the hospital,” according to Abu Sakhr. “The men were chained to the beds and blindfolded.[ii] The detainees were placed in rooms on the third, fourth and fifth floors, which means that there were at least 150 to 200 of them at a time,” he added.

In a separate testimony obtained by Pro-justice, Mahmoud al-Nasser,[iii] a survivor of the 601 Military Hospital, recalled:

In the car that took us to the hospital, torture never stopped until we arrived at the emergency section. They moved me on a wheelchair to a room that looked calm and quiet but was full of detainees who were heavily injured. They tied my left hand and right leg to a bed which I shared with another detainee, although it was merely 80 cm wide. On the first day, my body was swollen and my eyes closed. I did not know what was around me … The following day, the head of the detainees ward at the hospital came and started hitting me with a baton on my head because I was talking to the doctor. I learned then my first lesson: I was not allowed to talk to the doctor. I stayed in that room for about a week. I refused to eat hoping that I would die. However, I tried to inspect the food with my hand (as I could not see). It was given to the two of us but was barely enough for one. The yelling of the shabeeha, security agents, doctors, nurses, food distributors and cleaning workers broke the room’s silence as they insulted and beat us right on our wounds. We tried not to scream or even moan because this would provoke the shabeeha to hit us more. One of them broke the forefinger on my left hand thinking it was my right one, claiming that I used it to fire a gun.

After a while, the detainees, including Mahmoud, were transferred to the bandage ward. Here they were laid out on the beds and chained. Mahmoud’s bed was next to the window, where he heard the sounds of detainees being tortured in the other parts of the hospital. He claimed that he and his fellow detainees were subjected to torture daily.

The torture process began when detainees were brought to a long corridor where they were forced to lie down on the ground. Mahmoud said that shabeeha members then started a “torture party,” the duration of which varied according to the political and military conditions outside the hospital/prison. “They called this round of torture ‘hospitality,’ where the shabeeha came to those who remained alive and targeted their wounds, leaving them with fractures or failing kidneys. Or a hurt eye or psychological trauma which made them lose sense of their surroundings. In most cases detainees would not return to the security agencies that they were transferred from; instead they would die in the hospital,” Mahmoud explained. 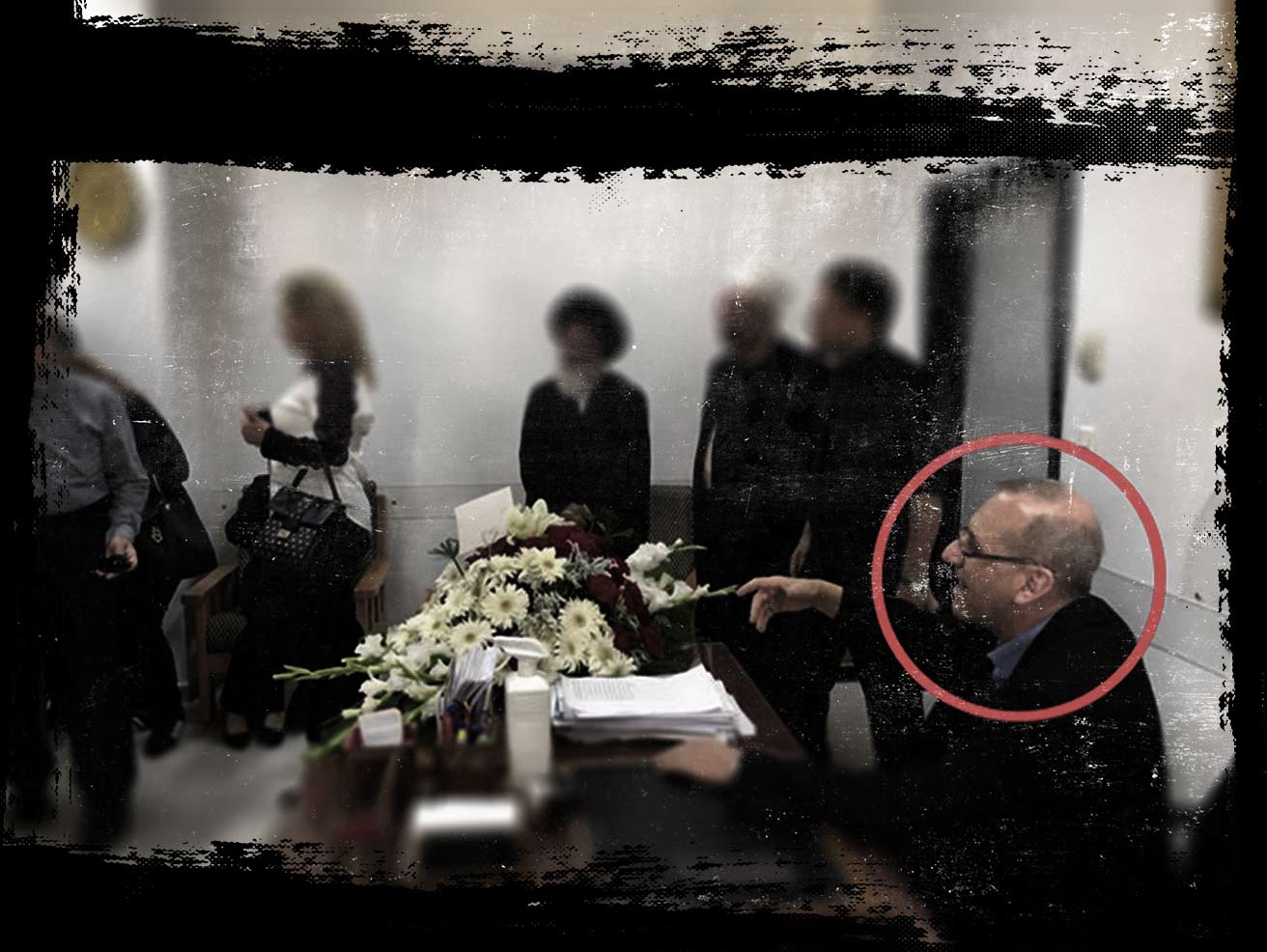 Mahmoud confirmed in his testimony that torture was not limited to a certain time of the night or day, but, more often than not, security personnel would come at night for prisoners, taking them outside to entertain themselves by torturing them, sometimes to death. “The majority of detainees were young and some we even children under the age of 15, and a good number of elders over the age of 80, and those among them who died were stacked in the toilets of the hospital while workers waited for a car to take them to where they were buried,” Mahmoud added.

Another defector, known as “Suleiman,” said that the hospital’s transformation into a “slaughterhouse” had begun in the early days of the peaceful protests in March 2011. At that time, the hospital had a heavy security presence because the bodies of more than 45 demonstrators killed by security forces and militias were transferred there. Some of the bodies were placed in hospital morgues while dozens of other bodies remained dumped in other rooms for lack of available space. The bodies were then transported to an unknown location. The hospital has since converted one of the sections of the abandoned old wing into a prison, dividing it into several cells.

Suleiman explained that hospital management would assign one bed for every two prisoners. The injured were badly treated by medical staff and cleaners who also contributed to beatings and torture.

Suleiman noted how the bodies of those who died under torture were stacked in the hospital yard inside the hospital yard. A forensic doctor would then pass them quickly and draft a report saying that the deceased had died of a stroke, a heart attack, or a brain clot, ignoring all signs of torture on their bodies. The doctor would then mark the body with a serial number[iv] and draft a report that would include personal information about the deceased, including their full names and the security branch in which they died or were brought from. These reports were then submitted to Lieutenant Colonel Shadi Rizk Zodeh, the officer in charge of archiving the names of the deceased. Then hospital management, in coordination with the intelligence agencies, transported the bodies, wrapping them in plastic and loading them inside a small truck, stacking the bodies on top of one another. The vehicle left only when it was fully stuffed with some 300 bodies. One truck would leave the hospital once every other day, which gives an idea of the number of prisoners who were killed inside the hospital.

A report by the UK Channel 4[v] broadcaster aired in early August of 2018, documenting victims at Hospital 601. Most of their deaths resulted from physical and psychological torture, either in a detention facility or the Hospital 601, which was overseen by Dr. Haddad. Military Hospital 601 is not the only facility where similar abuses were conducted. Another such center is the Tishreen Military Hospital in Damascus.

Caption: Dr. Haddad with a delegation from the Peace Pigeon Organization

[i] Video interview with a survivor of the Hospital 601: https://youtu.be/mvLMh7meYfY

[iii] Mahmoud al-Nasser was arrested after a battle with the Syrian army and was taken to Hospital 601.

[iv] This was corroborated by revelations obtained by the whistleblower “Caesar.”