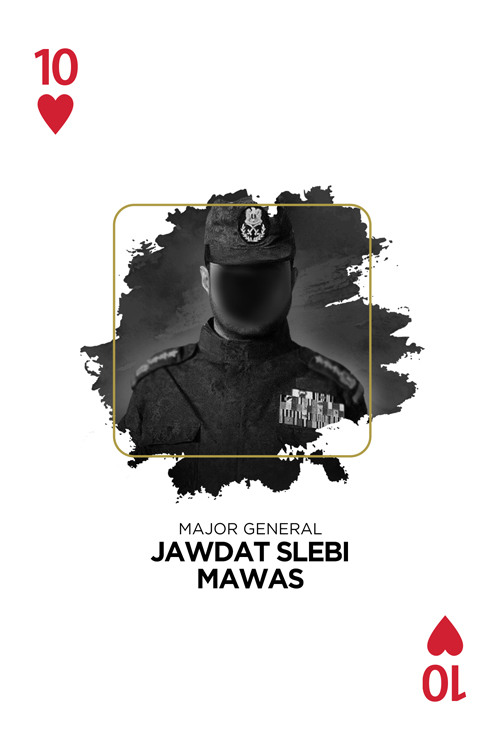 Current service position
Officer in the Artillery and Missiles Directorate

Jawdat Saleebi Mawas was born in the village of Rabah in the western Homs countryside in 1954. He joined the military, and rose through its ranks, joining the Artillery and Missiles Directorate. He was then transferred in 2011 to the 155th Brigade specialized in “Scud” missiles, located near al-Qutaifa in the Damascus countryside.

In 2013, Major General Jawdat’s name became prominent when the regime launched a number of Scud missiles at Aleppo and its countryside, which destroyed populated districts and killed hundreds during the bombardment, as well as increasing the waves of displacement from the city and its countryside.

In the same year, Major General Jawdat oversaw the chemical attack on the eastern Ghouta, which killed 1,127 people, including 201 women and 107 children, according to a report by the Syrian Network for Human Rights[1]. Opposition sources submitted estimated death tolls of up to 1,400 people, which was bolstered by American intelligence reports, which for their part confirmed that Major General Jawdat personally oversaw the launching of 16 “surface-to-surface” missiles at 2:30am on Aug. 21, 2013.

Brigadier General Jawdat is considered to be the connection between the Syrian Ministry of Defense and the General Institution for Technological Production, which a United Nations report[2] confirmed was involved in chemical weapons development for regime forces.

In 2016, the American Permanent Representative to the United Nations, Samantha Power, included Brigadier General Jawdat’s name in a list which included the most prominent regime leaders involved in carrying out wide-scale violations, which she described as “Assad’s criminals” and vowed to hold them to account, saying: “Today, I would like to specify some of the names of those involved since 2011 in killing and injuring civilians by conducting air and ground-based Syrian government military assaults on cities, residential areas, and civilian infrastructure. The United States will not let those who have commanded units involved in these actions hide anonymously behind the façade of the Assad regime. We know who some of these commanders are … Now, I know right now, today, with wind at their backs, these individuals feel impunity. So, though, did Slobodan Milosevic, Charles Taylor, and countless war criminals before them. Today’s atrocities are well-documented, and the civilized world’s memories are long.”

Major General Jawdat Saleebi Mawas is subject to Canadian[3], British[4], and European[5] sanctions as a result of his major role in crimes against the Syrian people.

What follows is list of a number of the massacres committed by Major General Jawdat Saleebi Mawas during his time at the 155th Brigade:

The Syrian Network for Human Rights in a report[6] issued on 2/3/2013 documented the launching of 61 Scud missiles from the 155th Brigade, which struck 59 populated locations. It also published another report on 9/6/2013 in which the same Brigade was documented as launching 131 rockets, distributed as follows:

The report was accompanied by a list[7] of the names of 257 civilians who were killed, including 84 women and 54 children, and about 1,000 who were wounded, as a result of this rocket bombardment.

Major General Jawdat has been documented as being involved in the execution of rocket and chemical bombardments. These include the chemical attack on Khan Shaykhun (4/4/2017) which killed about 90 people, including women and children, as well as the hundreds who were killed and wounded and the thousands who were displaced in the subsequent period as a result of the Syrian regime’s use of ballistic missiles against populated areas. The following figures bear direct responsibility for this: Major General Jawdat Saleebi Mawas, Major General Adnan Helwah, and Major General Jumaa al-Jassim, the head of the Artillery and Missiles Directorate.

Major General Jawdat Saleebi’s Mowas’s wife, Ghana Eissa Mawas, was killed in April 2015 in Damascus in mysterious circumstances. Jawdat also has a twin brother named Maurice who works as director of the Medical Services Directorate in the Defense Ministry at the rank of major general.