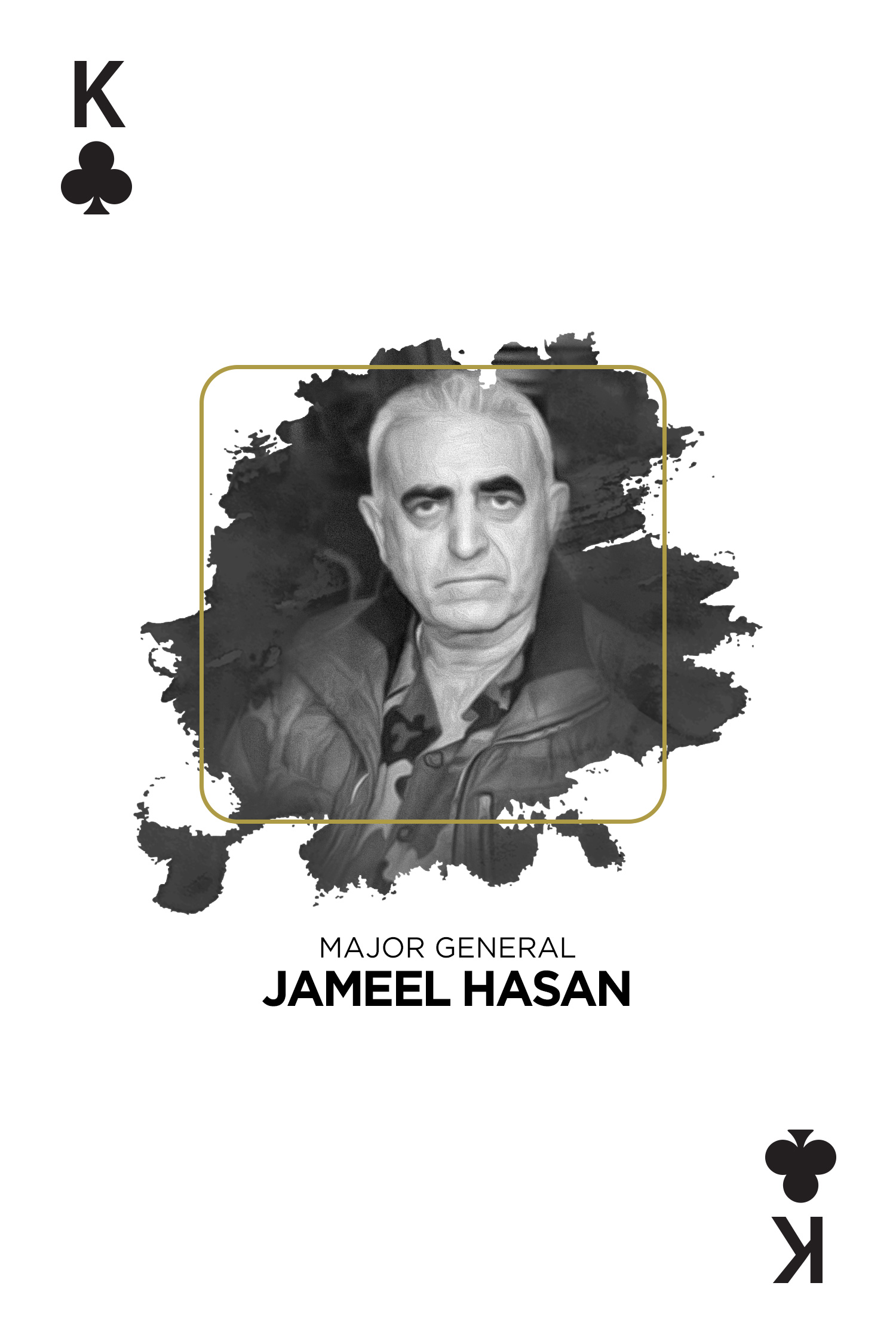 Major General Jamil al-Hassan, the Director of Administration for the Air Force Intelligence, is one of the most serious war criminals in Syria. He is the originator of the famous quote, “I am ready to kill a million people, and afterward they can take me to the International Criminal Court in The Hague.”

He was born in the village of al-Qarniyya in the province of Homs in 1952. He entered the War College in 1972 with a specialization in Air Defense, and rose through the ranks until he reached the rank of Major General on January 1, 2009. He was appointed as Director of Administration for Air Force Intelligence on July 1, 2009, succeeding Major General ‘Abd al-Fattah Qadasiyya.

Notwithstanding his bloody record in the repression of the opposition, Major General al-Hassan’s tenure as Director of Administration for Air Force Intelligence has been extended seven times in a row between 2011 and 2018. The last extension was from July 18, 2017 to July 18, 2018 per a Legislative Decree issued by Bashar al-Asad that left him in place as Director of Administration for Air Force Intelligence, which is considered one of the worst and most criminal Syrian security services. This contravenes all of the systems and laws that organize officers’ service in the Syrian army.

With the outbreak of peaceful demonstrations in 2011, Jamil al-Hassan emerged as one of those most embroiled in the random arrest, extortion, theft, torture, and murder of protesters, when he ordered the heads of his branch in the Syrian province to kill and arrest protesters, and to break up the lines of protesters and then open fire on them, not to mention crimes such as the assassination of national figures like the Kurdish activist Mish’al Tamu, who was assassinated in the city of Qamishli at the beginning of the Syrian revolution, as well as the cleansing of authorities with whom the state was not pleased, the fabrication of explosions in police units, state circles, and the patrols of pro-regime brigades loyal to the Interior Ministry, as happened in the Maydan neighborhood in Damascus, Hama, Aleppo, Dayr al-Zour, and elsewhere. 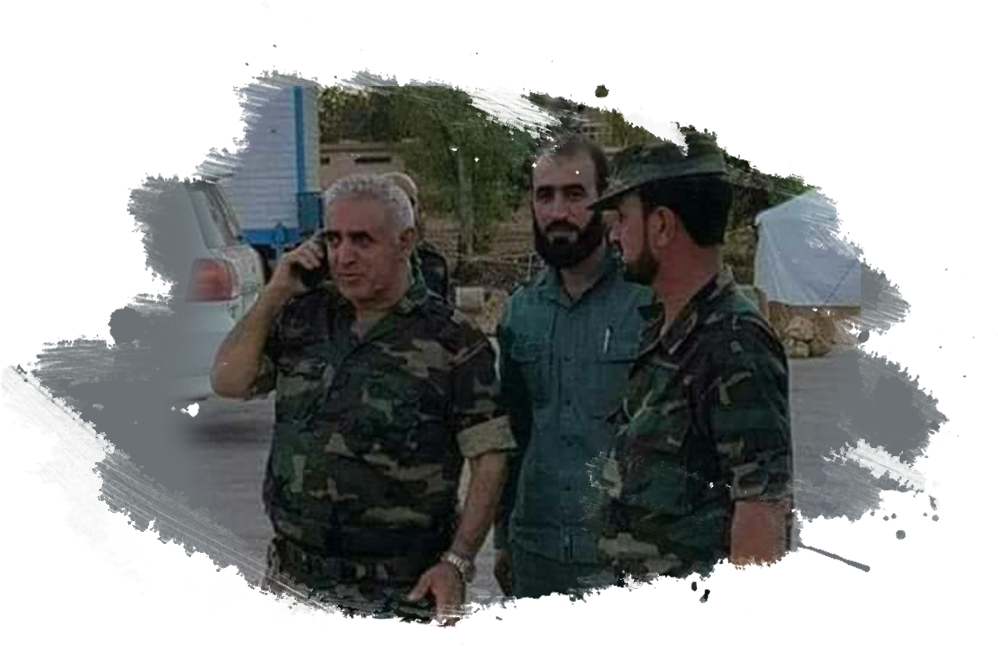 Amidst the political revolution, Major General Jamil al-Hassan has pursued an abhorrent policy of sectarian discrimination, taking the initiative to remove most of the Sunni soldiers and officers from Air Force Intelligence Administration, return them to service in the Army, and to replace them with officers from the Alawite sect. As a result, the proportion of Alawites in the administration has reached around 99%.

Likewise, Major General al-Hassan was granted absolute authority over all of the military units, especially the air bases, air defense units, and air forces: to select these units’ soldiers and officers and requisition their weapons, as well as authority over their air bases and license to use their aircraft in systematic repression missions.

In an interview with Russia’s Sputnik service, Major General Jamil al-Hassan spoke about the necessity of military decisiveness on the model of what happened in the city of Hama in 1982, when he participated in the massacres committed by regime forces in the city as a Second Lieutenant. Documented testimonies have describedthe role played by al-Hassan in the killing, arrest, and torture of a large number of the inhabitants of the city of Hama, and participation in the rape of women during the assault of the city.

These are the same policies that have continued to be followed in the branches of the Air Force Intelligence administration since 2011, when a defector from the security forces, “Afaq Ahmad,” claimed that he received direct orders from Jamil al-Hassan to kill all of the protesters coming to break the siege of the city of Dara’a after it was encircled by regime forces. This event was eventually called the “Saida massacre,” during which Hamzeh al-Khatib and Tamir al-Shar’i were killed under ugliest forms of torture. Their situation was similar to that of tens of thousands of Syrians.

A Human Rights Watch report published on December 15, 2011 entitled “By All Means Necessary! Individual and Command Responsibility for Crimes against Humanity in Syria,” quoted a defector from Air Force Intelligence with the pseudonym of “Omar” who was an assistant to the directors’ office in the Special Operations unit of the Air Force Intelligence branch in Damascus. He said that the Saida massacre took place according to the direct orders of Major General Jamil al-Hassan. The Center for the Documentation of Violations was able to document 98 deaths in Dara’a on April 29, 2011, whereas Omar counted 120 dead.

As Omar said, “My director, Colonel Suhayl Hassan in the Special Operations unit, took the advice of his second-in-command, Fawaz Qabir, and agreed to organize an ambush for protesters close to the military residence in Saida. The discussion took place in the office where he worked. They also discussed what would be said to the media, and they agreed that they would say that Islamists joined the marches in Dara’a to kidnap women and children from majority-Christian regions. Then I saw Suhayl call Major General Jamil al-Hassan on a direct line that [al-Hassan] used. I was not able to hear what Major General Jamil al-Hassan said, but I supposed that he agreed to the mission because soon afterward, troops began to leave the base in al-Mazzeh for Dara’a. When they returned in the evening, they brought with them the corpses of 120 murdered protesters and placed them in the base, alongside 160 detainees. I saw troops lower the bodies from transports and asked one of the soldiers how many there were. Suhayl al-Hassan assigned me to get the caravan in order to accompany the trucks that would return the corpses to Dara’a.”

Those directly responsible for this and other massacres in Damascus, the Damascus countryside, and Aleppo were:

It notes that Major General Jamil al-Hassan has been subject to European and British sanctions since 2011 because of his direct supervision of violence performed by members of the Air Force Intelligence administration against Syrians.

Samantha Power, the former representative of the United States to the United Nations Security Council, also mentioned him on a list that includes the names of regime military officials in 2016, affirming the presence of documented reports that confirm their commission of a wide variety of war crimes against Syrian civilians, and threatened them with prosecution. 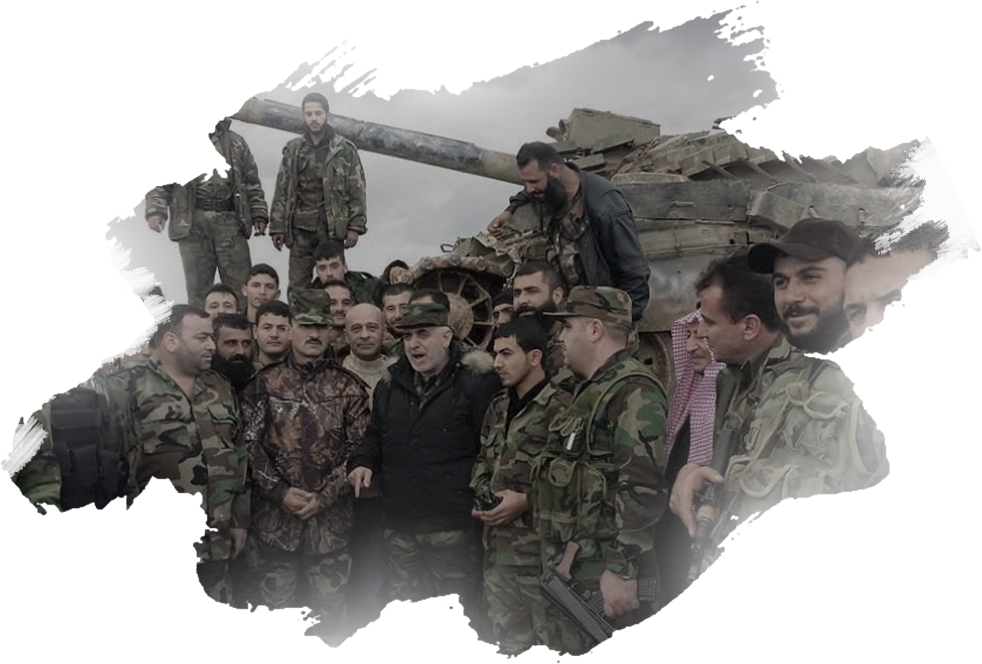 The truth is that Major General Jamil al-Hassan has exceeded all of his peers among the leadership of the security services, as his administration has issued around 33,000 arrest notices, alongside tens of thousands of forcibly disappeared, and those who have died under systematic torture. An Amnesty International Report entitled “It Breaks the Human: Torture, Disease and Death in Syria’s Prisons” discusses the types of torture practiced by the security services. A report published in 2015 entitled “If the Dead Could Speak: Mass Deaths and Torture in Syrian Prisons” documents the many murders committed by those services under the leadership of Major General al-Hassan.

It is worth noting that Major General Jamil al-Hassan is the godfather of Brigadier Suhayl al-Hassan and his militias, and he has an excellent relationship with Russia. He has three Russian flags in his office alongside the regime flag, and he has bestowed honors upon many of those enrolled in the “Tiger” forces. He has also given them Russian certificates of honor issued by the leader of Russian forces in Syria.