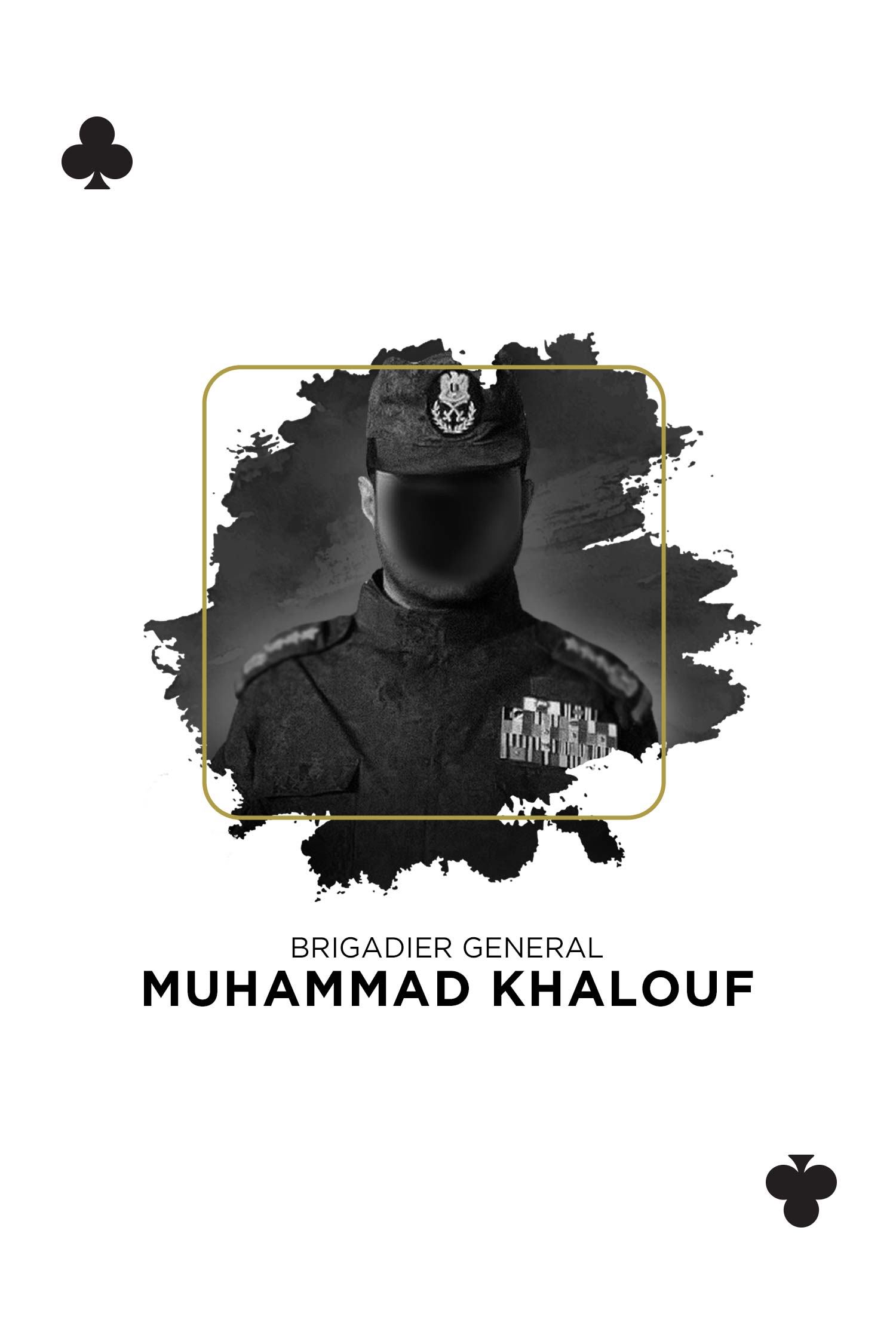 Brigadier General Mohamed Khalouf served in the Military Intelligence Directorate, where he was deputy to Major General Jameh Jameh in the directorate’s branch in the Lebanese capital Beirut.

Brigadier General Mohamed Khalouf is one of the most prominent figures charged in the assassination of former Lebanese Prime Minister Rafik al-Hariri. His name appeared in the lists of Syrian figures implicated in the crime, and was also noted by witnesses in the Hariri investigation.

When he returned to Syria, Brigadier General Khalouf was appointed commander of the Border Guard in the al-Tanf area in 2007 for two years. He then became president of Branch 235, known as the Palestine Branch, within the Military Intelligence Directorate in 2009.

When the popular protests broke out in March 2011, Brigadier General Khalouf became one of the most prominent criminals in the security establishment, as the Palestine Branch from 2011-2014 witnessed a chain of some of the worst violations carried out by members of the Military Intelligence in Syria, including killings under torture, violations of human dignity, and other shameful practices. Brigadier General Mohamed Khalouf is directly responsible for the crimes committed by members of the branch during the time of his administration until he was transferred to Latakia and Brigadier General Yassin Dahi was appointed in his place in April 2014.

A report issued by the Human Rights Watch organization in 2012 titled, “Torture Archipelago: Arbitrary Arrests, Torture, and Enforced Disappearances in Syria’s Underground Prisons since March 2011[1],” documented violations carried out by members of the branch against prisoners under the supervision of Brigadier General Mohamed Khalouf against, including both men and women. This included arbitrary beatings, systematic torture, starvation, deprivation from medical care, and arrest in terrible conditions.

One of the survivors, Ali Bassam Arafat, described[2] what he witnessed, saying: “Almost every day, I heard from the solitary confinement next to mine that six detainees died, as one of the detainees who was code-named Ash-Shawish called the jailer more than once saying: ‘Sir; someone returns the plate,’ an expression used when someone dies or about to die either because of the torture he exposed to by the interrogators or by one of the detainees among us whom are code-named Ash-Shawish, those who received orders to kill some detainees and were given more food as a reward, but in case they disobey orders, their lives became at stake.  They were spreading horror in our hearts more than the jailers themselves because they were living among us … During my detention period in the two branches (227) and Palestine branch (235) in Damascus, I was a witness to more than 500 bodies belonging to detainees who had died under torture.  Besides I was subjected to various forms of torture, beginning from beating my whole body even the genitals with sticks, and ending with electrocution and hearing the laughter of the jailers overseeing my torture.”

A former prisoner of the Palestine Branch said that some prisoners had gone insane and has lost their memory and concentration during the torture, and that members of the branch would tie some people up with plastic bags like skullcaps and then tie them around their heads until they died, without giving them any treatment.

The deaths of a large number of prisoners under torture have also been documented in the Palestine Branch by the witness Caesar, who took photos which showed the horrific effects of torture on the dead[3].

The torture methods for which the branch is known include:

In addition to the crimes which occurred under his supervision in the Palestine Branch, Brigadier General Mohamed Khalouf is also one of the most prominent officials responsible for the bombing of the al-Qazaz district in Damascus, where two car bombs containing more than a thousand kilograms of explosives went off on the morning of Thursday 10/5/2012 in front of the Patrols Branch in Damascus. After charges were leveled against the Nusra Front, leaked documents revealed the regime’s involvement in this blast, which killed more than 70 civilians, wounded hundreds, and inflicted major damage on the residences, stores, schools, academies, and university faculties in the area around the branch.

As a result of the crimes which he has been documented carrying out against civilians, Brigadier General Mohamed Khalouf was included in the British[4], European[5], and Canadian[6] sanctions list during the time he headed the Palestine Branch from 2009-2014.

[2] Available at Syrians for Truth and Justice: https://www.stj-sy.com/en/view/270