At the outbreak of peaceful protests in March 2011, Mufeed Wardeh served as the head of a Military Security unit in the city of Talkalakh in the western countryside of Homs.

Talkalakh’s population is characterized by its diversity, with a population of about 60,000 people, mostly Sunni Muslims, Arabs, Kurds and Turkmens. The city is surrounded by some 45 villages, mostly populated by Alawites, prompting the Assad regime to use its allied Shabiha paramilitary groups from nearby villages to suppress the peaceful demonstrations in Talkalakh when they broke out in March 2011.

In mid-May 2011, the city of Talkalakh was shelled and then invaded by the Syrian army and security forces. A number of people were killed and wounded as a result of reprisals against the residents, in addition to the displacement of hundreds of locals who were forced to flee the city to Lebanon. In the following days, the security forces arrested all men between the ages of 18 and 60. No family was spared from losing at least one male member to detention.

In the meantime, incursions continued by the regime’s forces, and violence increased as Hezbollah militias intervened, increasing the level of sectarian killing and compounding civilian casualties.

Mufeed Wardeh is one of the foremost officials responsible for the crimes committed in the Talkalakh area, among which was the storming of the Burj neighborhood by security forces in late-March 2013, which saw the mass killing of civilians, including slaughter by cold weapons (non-firearms). An eyewitness described the incident in detail: “The houses of peaceful civilians were broken into. Entire families were slaughtered with knives. Some were shot and their bodies were mutilated. The bodies of 15 people, eight women and three men, one of whom is nearly 70 years old, and a 3-year-old girl were found after the massacre.”

According to other eyewitnesses, the bodies were mutilated and then locked away in the Talkalakh National Hospital. Security forces coerced families of the dead to appear on satellite television and blame the opposition forces for committing the massacre in return for handing over the bodies of their relatives. The families did what they were ordered so that they could bury their loved ones. Upon retrieving the relatives, most of the bodies were disfigured and mutilated, with some victims’ parts separated from their body entirely.

In an investigation into the atrocities at Talkalakh, a 2011 Amnesty International report confirmed Colonel Wardeh’s connection to the crimes in Talkalakh, al-Hosn (Krak des Chevaliers), and Zara. Militias formed in the Wadi al-Nassara area, which are known to have carried out numerous atrocities, including one that took place in al-Haon (in which 72 people were killed, including entire families), were directly under Wardeh’s authority. The paramilitary groups set fire to the Saladin Mosque and the southern entrance to the fort while reportedly shouting sectarian chants. 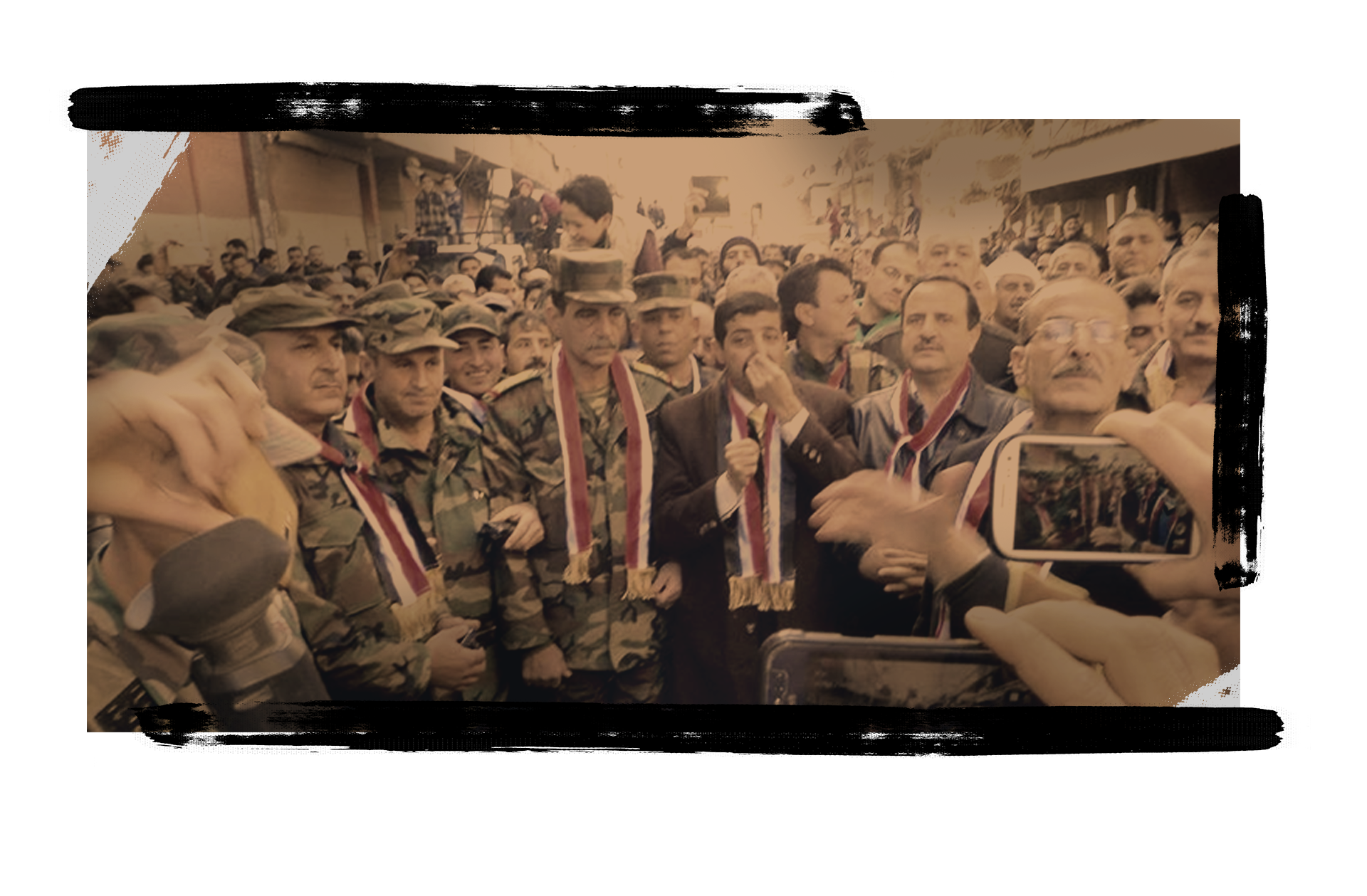 A report by the Syrian Network for Human Rights (SNHR) documented the massacre at al-Hosn, stating that Colonel Wardeh commissioned the poisoning of foodstuffs designated for residents of the city, leading to several deaths. Major Adel Wahbi, a witness to the invasion of al-Hosn, told SNHR: “Soon the city was besieged and suffocating from all sides, which led to the death of many people by starvation and forced many others to flee to different countries. The rebels eventually withdrew on March 20, 2014, but before the withdrawal, civilians and children were secured and taken out through various routes, but not without great losses. 120 people, mostly women and children, reportedly went missing. When the rebels withdrew, regular and paramilitary forces stormed into the city: the pro-regime SSNP (Syrian Socialist Nationalist Party) militia known as Al-Zobaha (The Whirlwind) from the town of Hwash and led by Saed Othman; the National Defense Forces militia from Marmarita led by Bishr Yazigi; and the government forces led by Colonel Wardeh. What resulted was the destruction of the city of al-Hosn by fire, the looting of its property, the logging of forests, the killing of livestock and the reinforcement of barriers at the city entrances to prevent the return of the city’s original inhabitants. The Assad regime let only a group of some 500 people return to the devastated city out of the city’s 25,000-large population. The people who were allowed to return were reportedly those whose sons accepted to fight alongside the regime’s forces.”

Alongside commissioning extra-judicial killings, torture and mass-arrests, Wardeh’s criminal actions extend to trading detainees for thousands of dollars. Furthermore, Wardeh was known to have engaged in currency exchange businesses, starting an office both in Syria and Lebanon for laundering the hundreds of thousands of dollars he had illegally acquired during his service in the Military Security Directorate in Talkalakh.

In April 2014, Wardeh was transferred to head of the Military Security branch in Nabek, replacing then-Colonel Mazen al-Kanj, where he continued his kidnapping and extortion operations with the help of members of the Lebanese Hezbollah militia. Reports suggest Wardeh would provide Hezbollah militants with information about wealthy families in the city for abductions and lucrative ransoms, which were reportedly shared with Wardeh. He is also known to have sanctioned and taken part in extortions of residents from the neighboring city of Yabroud.

In 2016, Wardeh was promoted to the rank of brigadier-general and transferred to the city of Al-Kiswah in the Damascus countryside, where he headed the local Military Security branch. Here he took part in negotiations with the rebels of Daraya to forcibly relocate them from the city. He also supervised the regime-run shelters provided to Daraya’s residents who refused to go relocate to rebel-held Idleb.

Brigadier-General Wardeh also cooperated with Major-General Zuhair al-Assad on various military and security operations in the area. The headquarters of the 1st Armored Division, commanded by Major-General Zuhair Assad, is located in the city of Al-Kisweh. The two continued their cooperation until Wardeh was appointed as deputy head of the Military Security branch in Homs in 2017.

Brigadier-General Mufeed Wardeh and General Zuhair al-Assad during the imposition of a settlement in the city of Al-Kiswah. The Assad regime never fulfilled its promise to release the detainees of the city.