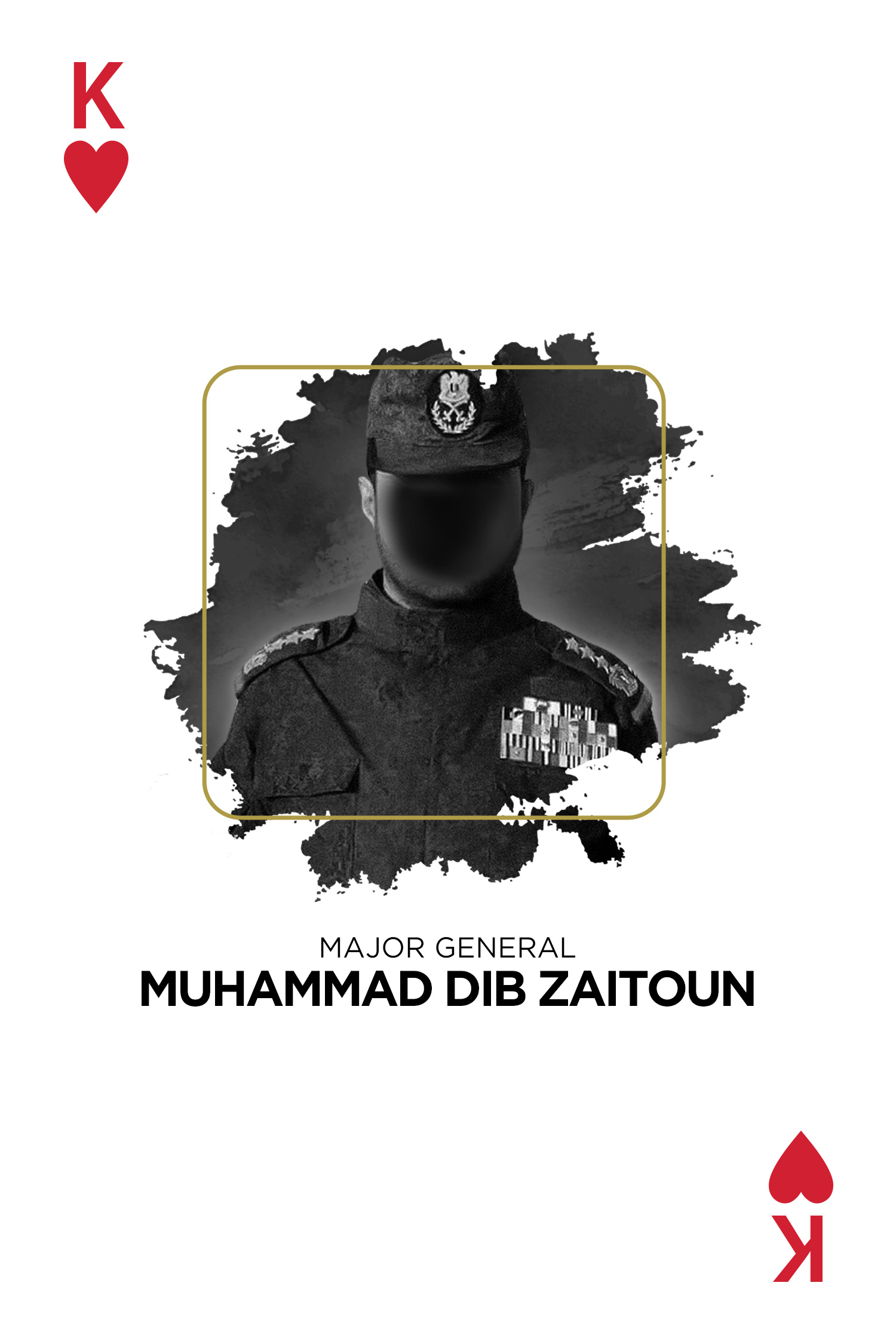 In the years preceding the revolution, Major General Muhammad Dib Zaitoun worked in the presidency of the Political Security Department. On July 18, 2012, he was appointed as Director of Administration for State Security, known by the name of the “General Intelligence Service,” succeeding Major General ‘Ali Mamluk, who was appointed Director of the National Security Office.

Muhammad Zaitoun has a long record of repression. He was in charge of investigating the “Damascus Declaration” group in 2007. Since then, Zaitoun has been considered one of the people closest to Bashar al-Asad in matters of political repression, especially because the Political Security Department takes orders directly from the presidency.

The most serious of the violations in which Major General Zaitoun is embroiled are as follows:

All of the crimes and violations committed by members of the Political Security Department during his tenure as its president in the period extending from the beginning of the Syrian Revolution in 2011 through July of 2012. He was placed at the head of a list of 77 security officials involved in the commission of grave violations of civilians’ rights. A Human Rights Watch report published on December 15, 2011 entitled “By All Means Necessary! Individual and Command Responsibility for Crimes against Humanity in Syria” confirms the leadership of the Political Security Department in the scene of repression in the city of Dara’a, and its involvement in the commission of a large number of massacres and arrests against civilians, including the detention of children, and opening fire on and killing protesters in a number of events that took place between March and April of 2011. This pushed the European Union to impose travel restrictions and freeze the accounts of Major General Muhammad Dib on May 9, 2011, amidst his participation in “acts of violence against civilians.”

In interviews with four torture victims, Human Rights Watch confirmed the involvement of Major General Muhammad Dib Zaitoun, alongside a number of Political Security officers in the commission of systematic torture, according to a report published by the organization in 2012 called “Torture Archipelago: Arbitrary Arrests, Torture, and Enforced Disappearances in Syria’s Underground Prisons since March 2011.” On pages 55-59 of the report, witnesses discussed how they were subjected to torture by soldiers of the Political Security administration, and in the Political Security branches of Idlib, Homs, Lattakiya, and Dara’a.

Major General Zaitoun is considered directly responsible for all of the crimes committed by members of the State Security administration from when he first took up his position there in July 2012 until the present day. Zaitoun has followed his criminal path behind Major General ‘Ali Mamluk, and the branches of the General Intelligence administration has practiced – under his authority – the worst forms of torture and human degradation in its prisons, in addition to the crimes committed by [Zaitoun and Mamluk] outside of these prisons. One can find precise documentation of some of these violations in an Amnesty International report published in 2015 entitled “Death Everywhere” about war crimes and human rights violations in Aleppo, and especially the crimes committed by the State Security branch in Aleppo.

Major General Zaitoun was likewise involved in acts of repression, siege, and collective punishment against civilians in Homs, and especially in the neighborhood of al-Wa’r, which resulted in the enforced displacement of its inhabitants.

As a result of his criminal record against the Syrian people, Major General Muhammad Dib Zaitoun has been placed on the British, European, Canadian, and American sanctions lists, as he has participated in a large number of criminal acts with Major General ‘Ali Mamluk and similar acts in highly sensitive matters, especially as concerns creating relationships and engaging in communications with foreign intelligence services. The two have traveled to many countries, the most important of which is Italy, which they visited in the middle of 2016 in a private airplane to meet an Italian foreign intelligence officer.

Zaitoun has not appeared in the media, no picture of him has been published in social media, and no photo has been found except that included in this report.