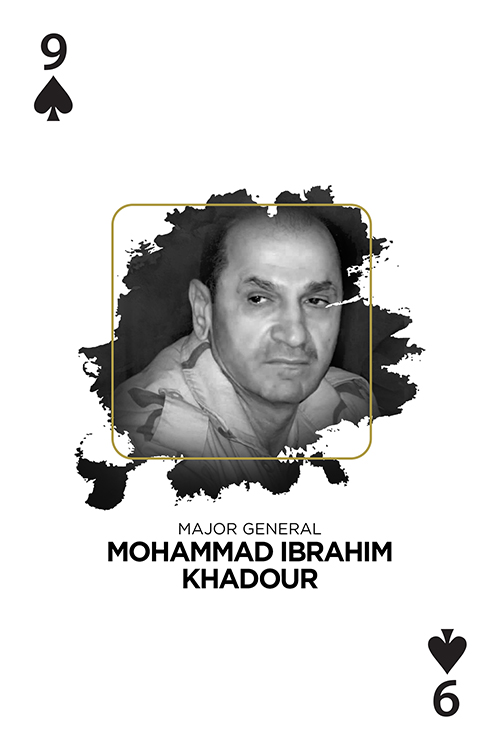 Upon the outbreak of peaceful demonstrations in April 2011, Muhammad Khaddur was the commander of the 106th Brigade of the Republican Guard at the rank of Brigadier. He was charged with operations in Eastern Ghouta, where he participated in storming Douma on April 25, 2011, and he issued orders to his soldiers to hit protestors, breaking their limbs, and arresting a great number of them.

According to the testimony of Lieutenant Colonel called “Ghassan” (one of the officers who had defected from the 106th Brigade), Brigadier Muhammad Khaddur ordered for protestors to be struck with clubs and then arrested. Detainees were held in the city council of Douma. Upon the growth in the number of protestors killed, Brigadier Muhammad Khaddur issued orders not to hit people hard on the head, and instead to break their limbs until they could no longer protest. He ensured that they be beaten and tortured in security trucks rather than public places.

Lieutenant Colonel “Ghassan” affirmed that executions and cleansings in Eastern Ghouta took place under the vision and hearing of Brigadier Muhammad Khaddur, Brigadier ‘Assam Zahr, vice-commander of the 104th Brigade of the Republican Guard at the time. The city of Douma suffered from the travails of arrest, from which more than 5,000 people were disappeared, and the deaths of around 100 people from immediate executions at checkpoints or under torture, in addition to campaigns of raids, arrests, the breaking and destruction of public and private property, the theft of gold and from commercial establishments, both in the city and in the farmlands surrounding it.

In the middle of 2012, the 106th Brigade of the Republican Guard, under the leadership of Brigadier Muhammad Khaddur, was sent to the city of Aleppo. He was appointed president of a military and security committee in Aleppo on November 29, 2012. In this period, Khaddur was involved in the commission of wide-spread crimes of killing, arrest, and looting, and he followed a policy of sectarian discrimination, targeting Sunnis with violations, as emerged in one of the regime campaigns to break the siege of the Minaq military airbase. He addressed a group of youths from the Shi’i towns of Nubl and al-Zahra, affirming that he will fight under the banner of Hussayn, and that he will raise the banner of Hussayn in Minaq, declaring “For you, Hussayn!” 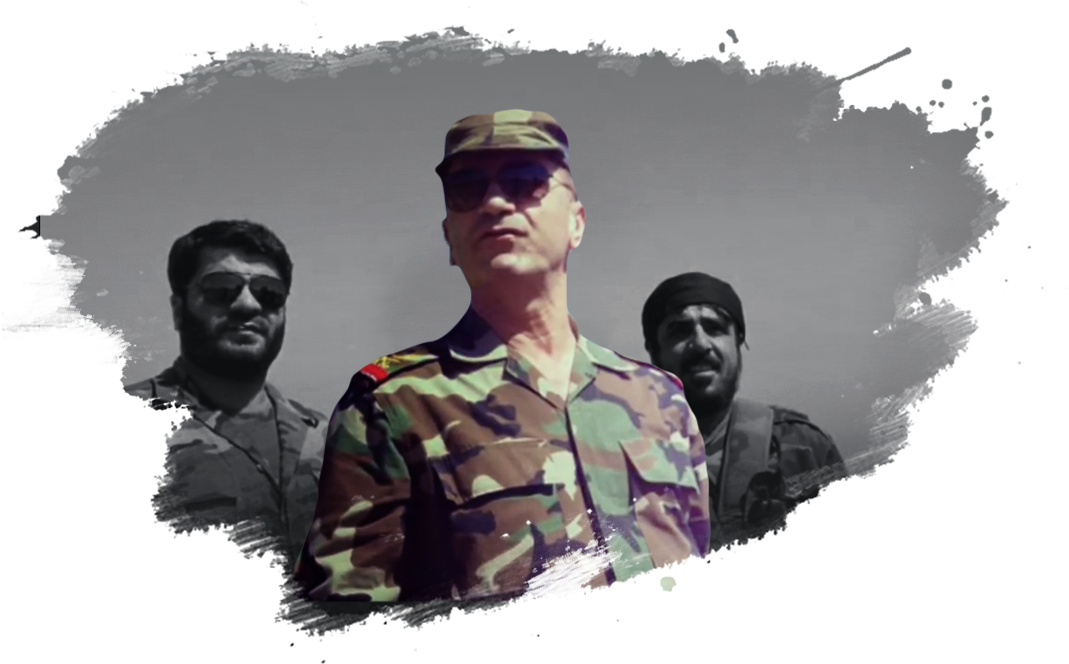 The period of the presidency of Muhammad Khaddur over the military and security committee in Aleppo witnessed major setbacks for regime forces, weakened by their criminal inclination, when Colonel Nidal ‘Abdallah, one of the officers of Aleppo’s central prison, cleansed the prisons of those suffering from tuberculosis, as a result of the spread of the disease and the inability to treat them.

As a result of being accused of corruption and weakness, Khaddur was relieved of command of operations in Aleppo, and transferred to command of military operations in the neighborhoods of Birzeh and Qaboun in Damascus, where he engaged in indiscriminate bombardment in the region, leading to the killing and expulsion of thousands of civilians.

As a result of his mad policy, Khaddur was transferred at the end of November 2013 to command of military operations in the areas of Western and Eastern Qalamoun in the Damascus countryside, where he led the storming of the regions of Bayroud, Rankous, Qarah, Mazari’ Rima, al-Nabak, and other areas in al-Qalamoun with the assistance of Lebanese Hezbollah, Iraqi militias, and especially Liwa’ Dhu al-Fiqar, in which several massacres resulted from random bombardment, since regime forces dropped around 30 barrel bombs per day, and launched around 20 raids daily, not to mention the launching of around 30 ground-ground rockets, “Volcano” rockets, and short-range rockets to force civilians to flee.

Upon the expulsion of civilians, Khaddur and his forces were involved in theft, looting, and the destruction of houses, and clearing civilians who had chosen to remain in the city. Brigadier Muhammad Khaddur, alongside Major General Salim Burkan who took up the leadership of the Third Division at the time, the ugliest forms of systematic killing and expulsion. He was likewise involved in smuggling artifacts from the areas of Yabroud, Ma’loulah, and especially from historical Christian churches present in the region, and framing opposition brigades and Kabhat al-Nusra.

At the end of 2014, Muhammad Khaddur was sent to al-Hasakeh, after being promoted to the rank of Major General, and was charged with launching a military operation to gain control over the Ghouiran neighborhood that had been totally destroyed, leading to the killing of more than 25 civilians and the wounding of others, not to mention the displacement of thousands from the “Arab” neighborhood of the city, and the arrest of all those who left the neighborhood despite their signing of a safe-passage agreement with the regime. 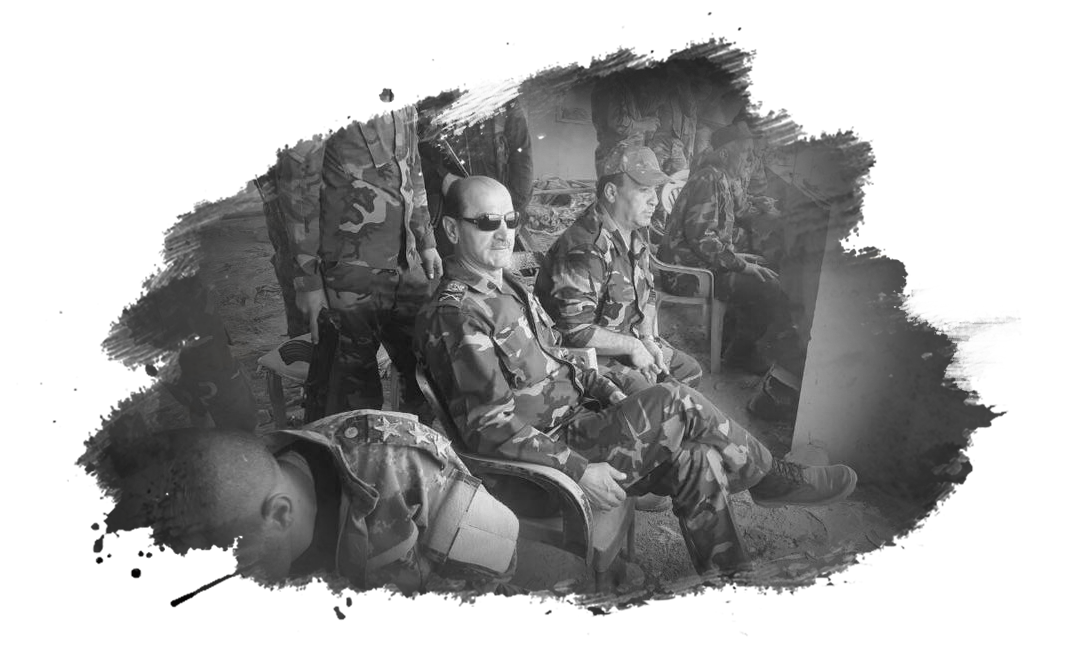 In 2015, Major General Muhammad Khaddur established – during his presence in al-Hasakeh – the al-Maghawir militia, the training of which was overseen by the Iranian Revolutionary Guard and Lebanese Hezbollah, and the forces of this militia were employed to engage in terror operations with the goal of expelling the largest number of the inhabitants of the city of al-Hasakeh in 2015.

In 2015, Major General Khaddur was appointed commander of the regime forces’ 17th Division. He continued in this until July 2016, when he participated in increasing the suffering of the people of Dayr al-Zawr, and he became deeply involved in corruption, as he was involved in moving families by helicopter from Dayr al-Zawr to al-Hasakeh at extraordinary prices, and resorted to trade in the aid that was turned away from besieged areas, and he eased the transportation of large merchants in the eastern region to Damascus, using military transport planes to ship goods and food, and sell them in the neighborhoods of the city of Dayr al-Zawr, which was besieged by ISIS. He also worked to privatize armed escorts for some merchants in the Damascus markets for profitable prices, and imposed protection on many merchants in exchange for extraordinary profits. One his most prominent partners in this period was Muhammad Sa’id al-Ashram (Abu Sa’id), Salih al-Khirfan, and Dhib al-Muhaymad.

Likewise, Major General Khaddur acquired millions in profits from civilians fleeing the ISIS siege of neighborhoods in the city of Dayr al-Zawr, in exchange for allowing them to leave through military transport planes to the city of Damascus. In the beginning of 2017, he was assigned president of the military and security council of Homs.

At the end of 2017, he was “assigned”[1] president of the military and security committee in Aleppo, succeeding Major General Zayd Salih, during which time he launched operations against ISIS in Dayr al-Zawr, for which he was rewarded with an appointment as president of the joint chiefs of staff of the Third Brigade. He oversaw the operations launched by the regime to gain control over the Abu al-Duhur airport, which resulted in the expulsion of around 150,000 people and the killing of a large number of civilians as a result of bombardment operations, not to mention his involvement in the looting of the entire region. He was compensated at the beginning of 2018 with an appointment as commander of the Third Brigade.

It is worth noting that Major General Muhammad Khaddur appeared in a Human Rights Watch report published on December 15, 2011 entitled “By All Means Necessary! Individual and Command Responsibility for Crimes against Humanity in Syria,” which held him directly responsible for killings in the city of Douma in Eastern Ghouta. Major General Khaddur is subject to European and British sanctions because of his direct oversight over killings, arbitrary detentions, and torture.

What follows are a number of massacres that regime forces committed under his command:

The Furn al-Walid massacre in the al-Haydariyyah neighborhood (Aleppo, December 2, 2012), which left 9 dead and dozens wounded as a result of bombardment of the neighborhood with mortars. 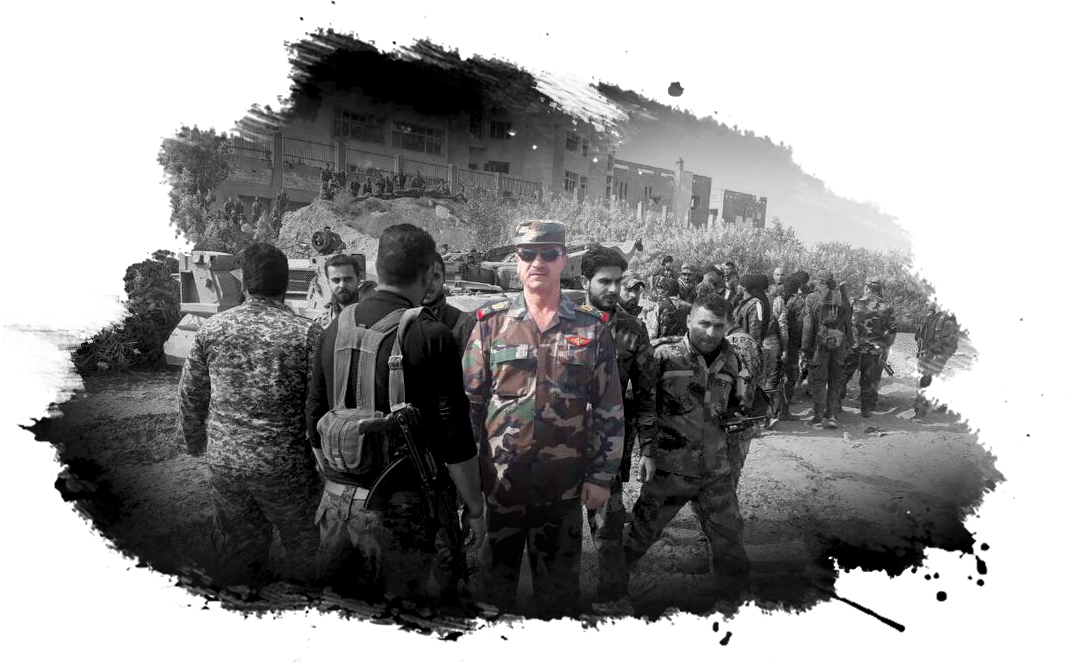 The Furn al-Idlibi massacre in the neighborhood of Bustan al-Qasr (Aleppo, December 3, 2012), which left 20 dead and more than 100 wounded, alongside great material damage as a result of artillery bombardment of the inhabitants who had gathered in front of Furn al-Idlibi.

The Jab al-Qubbah massacre (Aleppo, January 9, 2013), which left 27 dead as the result of rocket bombardment by regime forces of the neighborhoods of the city.

The massacre of the neighborhood of Jabal Badarro (Aleppo, January 29, 2013), which resulted in 128 detentions whose bodies were found in the Qawiq river.

The massacre of the village of al-Malikiyyah (Aleppo, February 27, 2013), which left 70 dead as the result of regime forces and Iraqi Shi’i militias executing the inhabitants with bullets, including children and the elderly, not to mention the burning of houses and the torture of inhabitants.

The massacre of ‘Azizah village (April 4, 2013), which left 22 dead as the result of regime forces’ storming the village and arresting a large number of youths, and then executing them and desecrating their corpses.

[1] Assignment in the Syrian army differs from the appointment, in that assignment is temporary in the administration of the actions of the military sector or the institution, whereas appointment can be for the assigned person or another person, and is done with a decision from the Supreme Commander Bashar al-Asad.