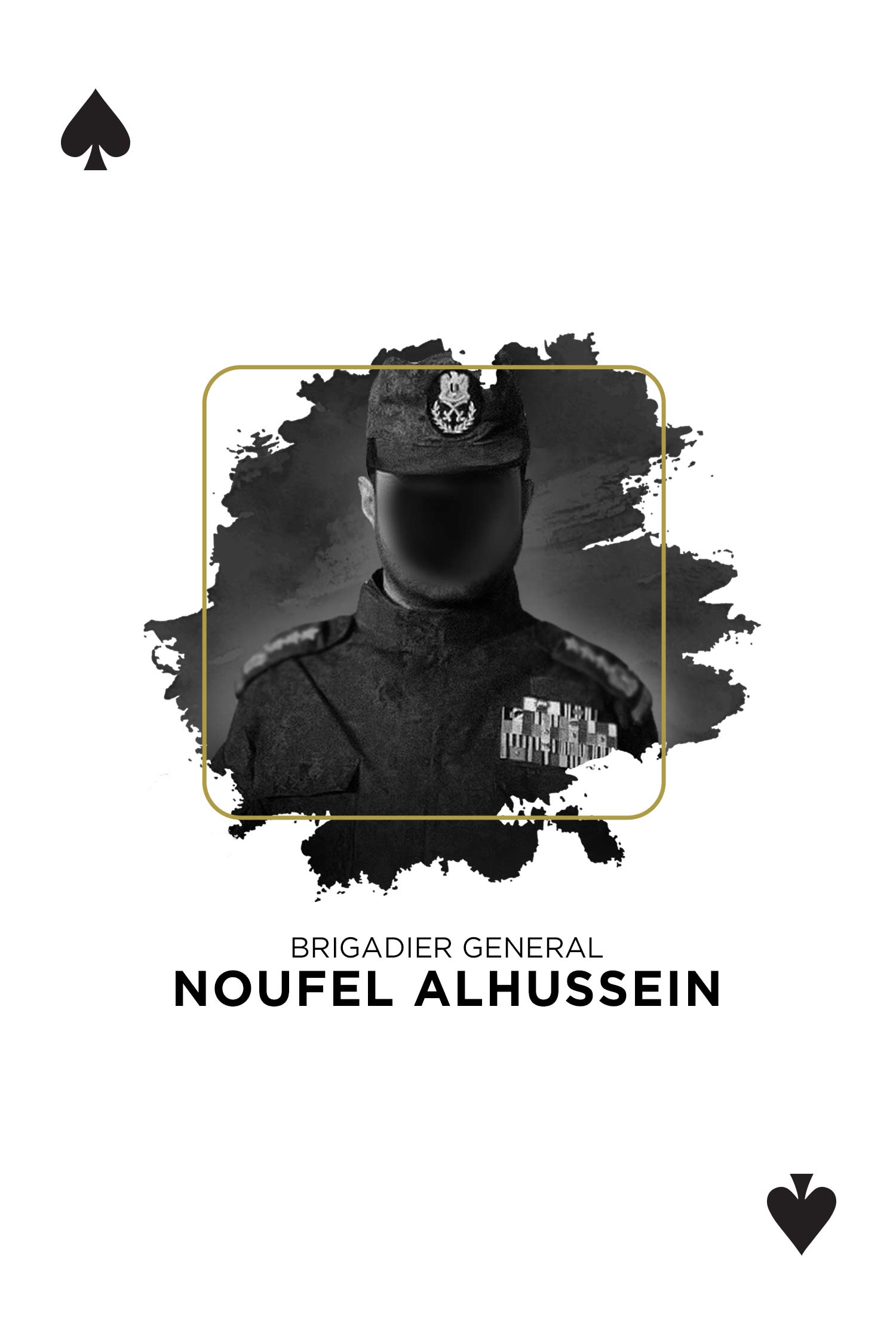 Born in the village of Al-Bayadah in the eastern countryside of Homs, Nawfel al-Hussein graduated as an army lieutenant in the early 1980s, joining the Military Intelligence Directorate (MID) and taking part in the government’s brutal crackdown operations in Idleb and Jisr al-Shughour at the time.

Over the next decades, Hussein rose through the ranks in the MID branch in Idleb, where he headed the counter-terrorism and incursions departments before eventually taking over as head of the provincial branch.

At the outbreak of protests in March 2011, Hussein was among a number of high-ranking officers responsible for ordering the brutal response toward demonstrators in the city of Idleb and its countryside. According to the testimony of the defector Yusuf Mustafa al-Taher,[1] Hussein also gave orders to his subordinates to open fire on demonstrators.

According to reports, the general could be spotted roaming by motorcycle from checkpoint to checkpoint throughout the province to oversee the arbitrary arrest of demonstrators. Along with security personnel under his authority, Hussein is known to have carried out torture on civilians inside Idleb detentions centers.

General Hussein is also said to be linked to two bus bombings which targeted factory workers in Idleb, resulting in the death and injury of a number of civilians.

A 2012 report by Human Rights Watch documented the abusive and criminal practices of the MID branch in Idleb, which was headed at the time by General Hussein.2 The report details the testimonies of seven former detainees who claimed some prisoners were kept underground, with one former detainee estimating that around 200-300 prisoners were kept in the detention facility at one time. Witnesses also testified that Hussein had personally carried out torture on victims.

Civilian testimonies obtained by Pro-justice also confirm the participation of General Hussein in the storming of Jisr al-Shughour, Jericho and Maarat al-Numan in 2012. He has also been accused of participating in the military campaign which led to the abduction of Syrian army defector Lieutenant Colonel Hussein al-Harmoush from Turkish soil. In addition, Hussein has been accused, together with General Ibrahim al-Ghobn, of committing the 2012 massacre at Taftanaz, which killed about 60 civilians, in addition to the destruction of about 170 houses inside the town.

In a 2015 incident, security personnel at the MID branch in Idleb, under the command of Brigadier-General Hussein, were accused of massacring 12 detainees. Seven other inmates managed to survive the atrocity, according to eyewitness testimony.3 Security forces from the same branch also committed another massacre in the city of Jisr al-Shughour, where 23 detainees were executed.

Hussein is also accused of ordering the execution of a number of detainees[2] and MID defectors who were arrested during military campaigns on the opposition areas of Idleb. Following the expulsion of regime military forces from the rebel-held province, General Hussein was tasked with supervising the MID training of graduates at the Hama branch.

For his role in violently suppressing civilian protests,  Brigadier-General Hussein was included in British[3], European[4] and Canadian[5] sanctions lists. He was recently demobilized after reaching retirement age.