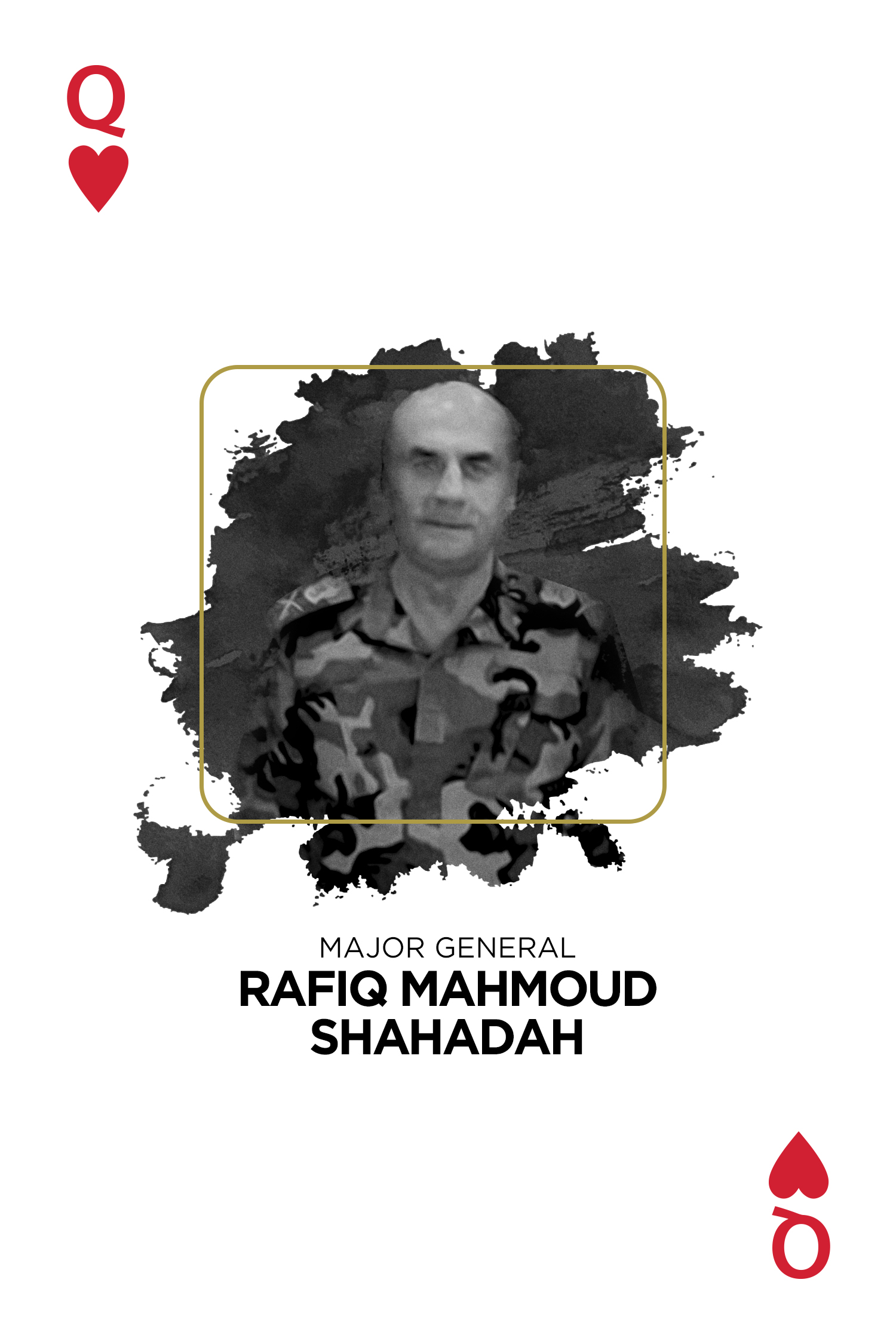 Major General Rafiq Shahadah is an old guard officer, and has been one of the most prominent of their number in Syria’s new phase. He commanded Hafez al-Assad’s guard brigade at the rank of brigadier general until the year 2000. As a result of a dispute with Major General Dhu al-Himma Shalish, Rafiq was transferred to Political Security, where he headed the branch in the Al-Maysat area of Damascus. He then returned to the Republican Guard for a period and was appointed head of the Military Security branch in Tartous. He was then appointed head of “Branch 293,” concerned with officers affairs under the authority of the Military Intelligence Directorate based in Damascus.

When the Syrian revolution broke out in 2011, Rafiq Shahadah was working as head of the Security and Military Committee in Homs, and served as deputy head of the Military Intelligence Directorate, headed by Major General Ali Mamlouk.

Major General Rafiq Shahadah is considered to be directly responsible for the Clock Square massacre in Homs, which killed and wounded hundreds of the city’s residents. He was also responsible for the violations committed by security forces in Homs province, especially in Baba Amr, Talbeesa, and Al-Rastan.

As a result of the “Crisis Cell” bombing in 2012, Major General Rafiq Shahadah was appointed as head of the Military Intelligence Directorate following Major General Ali Mamlouk, who became head of the National Security Bureau.

While he headed this agency — which is considered one of the strongest and most numerous of the regime’s security agencies — Shahada and his men carried out various violations and criminal acts against Syrians. He has been implicated in the killing, arrest and disappearance of tens of thousands of Syrians, as well as the rapes of hundreds of women in the Military Intelligence Directorate’s cellars, and the deaths and arrests of hundreds of officers and soldiers on the charge of opposing the regime or on suspicion of defection.

In March 2015, a decision was issued to put Major General Rafiq Shahadah under the command of the Commander-in-Chief of the Army and Armed Forces, Bashar al-Assad. Major General Mohamed Mahala was appointed in his place, as a result of Shahadah’s responsibility for the death of Major General Rustum Ghazaleh, head of the Political Security Directorate at that time, after he was beaten by Shahadah’s men after a dispute related to corruption.

Major General Rustum Ghazaleh was one of the figures accused of assassinating former Lebanese Prime Minister Rafic Hariri in 2005, as well as Major General Ghazi Kanaan, who happened to commit suicide in his office the same year. They are joined by Major General Jameh Jameh who was killed in Deir Ezzor in 2013, which raised suspicion that figures related to Hariri’s assassination were being liquidated.

In July 2016, the New York Times published[1] a report about the details of the suit brought by the family of the journalist Marie Colvin (“Case 1:16-cv-01423[2]”) before a federal court in the American capital, Washington, D.C., against the Syrian Arab Republic on 9/7/2016. The journalist’s relatives accused ten Syrian officials, most prominently Maher al-Assad, Ali Mamlouk, and Rafiq al-Shahadah of killing Colvin in the Baba Amr district on 22/1/2012, as well as the French photographer Rémi Ochlik, when regime forces bombarded one of the buildings which the correspondents were using as a media center.

The family submitted a number of official papers proving the Syrian regime had targeted the media center with artillery shells with the intent to kill after Major General Ali Mamlouk and his deputy Rafiq Shahadah came to learn of the journalists’ arrival to the Baba Amr district of Homs through intelligence agencies in Lebanon in February 2012. On 21/2/2012, the Military Intelligence Directorate intercepted phone calls from the journalists, and one of the directorate’s informants in Baba Amr contacted Khaled Fares (a leader of the local regime loyalist “death squad” militias) and specified the media center’s location. Based on this, the center was targeted on the morning of 22/2/2012 with artillery shells which killed Colvin and Ochlik and wounded the French journalist Edith Bouvier, who was able to cross into Lebanon with her colleague, William Daniels.

Rafiq Shahadah is considered one of the most controversial officers in the regime’s ranks, as he has been deeply involved in corruption and has exploited his position to serve his personal interests. His son, Mudar, was appointed to the Syrian Foreign Ministry and was made a diplomat working in the Syrian embassy in London. When this embassy was later closed, he was transferred to the embassy in Ukraine, noting that his education did not exceed high school. He has two brothers, the “journalist” Sharif Shahadah and another serving as an officer in the Syrian army.

According to trustworthy information, Rafiq Shahadah had a role in liquidating a number of regime officers who had sensitive information that could affect the regime with the international community and the case of Rafic Hariri’s death, most prominently:

In addition to his role in liquidating regime officers, Major General Rafiq Shahadah is considered to be one of the regime’s most prominent officials in committing crimes against Syrians throughout the positions and responsibilities he has held. During his time as head of the Security and Military Committee in Homs province, he issued orders to kill civilians, and was implicated in crimes committed systematically against women and children. He has been quoted as saying that civilians from these areas are “the popular base and incubator for terrorists.”

During the time he headed the Military Intelligence Directorate, Shahadah issued orders to the heads of the branches in the provinces to use heavy weapons against civilians and to strike populated areas, taking advantage of his proximity to the Syrian command and his influence over the army and security forces.

As a result of his criminal record, Major General Rafiq Shahadah has been subject to American Treasury Department sanctions[3] since 2017, along with 17 officials in the Syrian regime and six other entities under regime authority for their role in the regime carrying out monstrous crimes against the Syrian people.