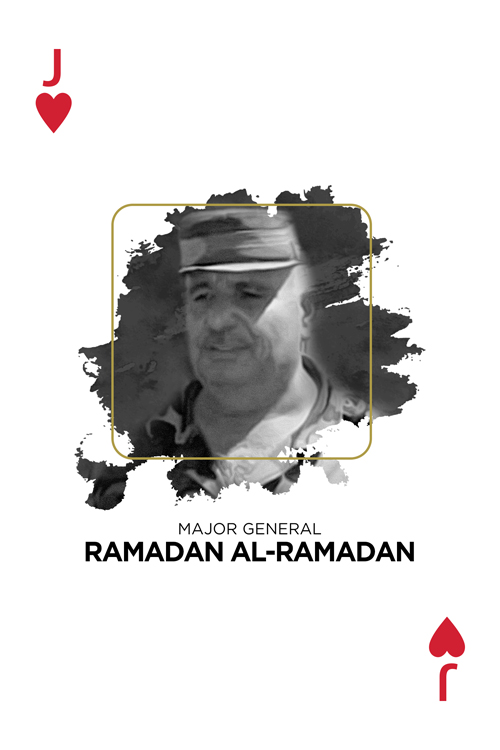 When Syria’s peaceful protest movement erupted in March 2011, Ramdan al-Ramadan was a commander in the 35th Brigade Special Forces under the authority of the Fifteenth Special Forces Division at the rank of staff officer brigadier general.

His star rose to prominence in this period as a result of the repression in which he was complicit, in addition to his abhorrent sectarian statements, whereby he threatened to wipe out Daraa and Idleb in response to the peaceful protests which had been coming out against the regime.

Major General Ramadan’s name was mentioned in a report by the Human Rights Watch organization on 15/12/2011 titled, “By All Means Necessary!: Individual and Command Responsibility for Crimes against Humanity in Syria[1]”, where a fighter who defected from the 35th Special Forces Regiment called “Amjad” said that he received direct verbal orders from his commander to open fire at the protesters on April 25. In his testimony he said: “The commander of our regiment, Brigadier General Ramadan Mahmoud Ramadan, usually stayed behind the lines. But this time he stood in front of the whole brigade. He said, ‘Use heavy shooting. Nobody will ask you to explain.’ Normally we are supposed to save bullets, but this time he said, ‘Use as many bullets as you want.’ And when somebody asked what we were supposed to shoot at, he said, ‘At anything in front of you.’ About 40 protesters were killed that day.”

This day was the start of the regime army’s storming of the city of Daraa, employing heavy weapons, in an operation which killed about two hundred people and wounded hundreds of others.

According to another testimony from the defected officer “Habib,” published in the Human Rights Watch report published on 1/6/2011, titled, “We’ve Never Seen Such Horror,” his unit in Daraa received orders from Brigadier General Ramadan, commander of the 35th Regiment Special Forces on April 25 to open fire on protesters.

Despite Ramadan being added to the European sanctions list in mid-2012 after it was shown that he issued orders to soldiers to fire on protesters in Banyas and Daraa, he was appointed acting commander of command of the Ninth Division where his rank was staff officer brigadier general, and then was promoted to the rank of major general and was appointed commander of the Ninth Division, which participated under his command in the battles of Harasta.

At the end of January 2018, Major General Ramadan was subject to an assassination attempt, which pushed him to threaten the residents of the town of al-Sanamayn, home to about 60,000 civilians, to leave the city for the town of Jabab. Major General Ramadan had a prominent role in supporting suspicious figures who claimed to join the opposition and then soon returned to the regime, including the so-called Antar al-Labad, known for his suspicious connections with arms and ammunition sales to the Khalid bin al-Walid Army which pledged loyalty to the ISIS organization and was deployed in the Yarmouk basin in the western Daraa countryside.