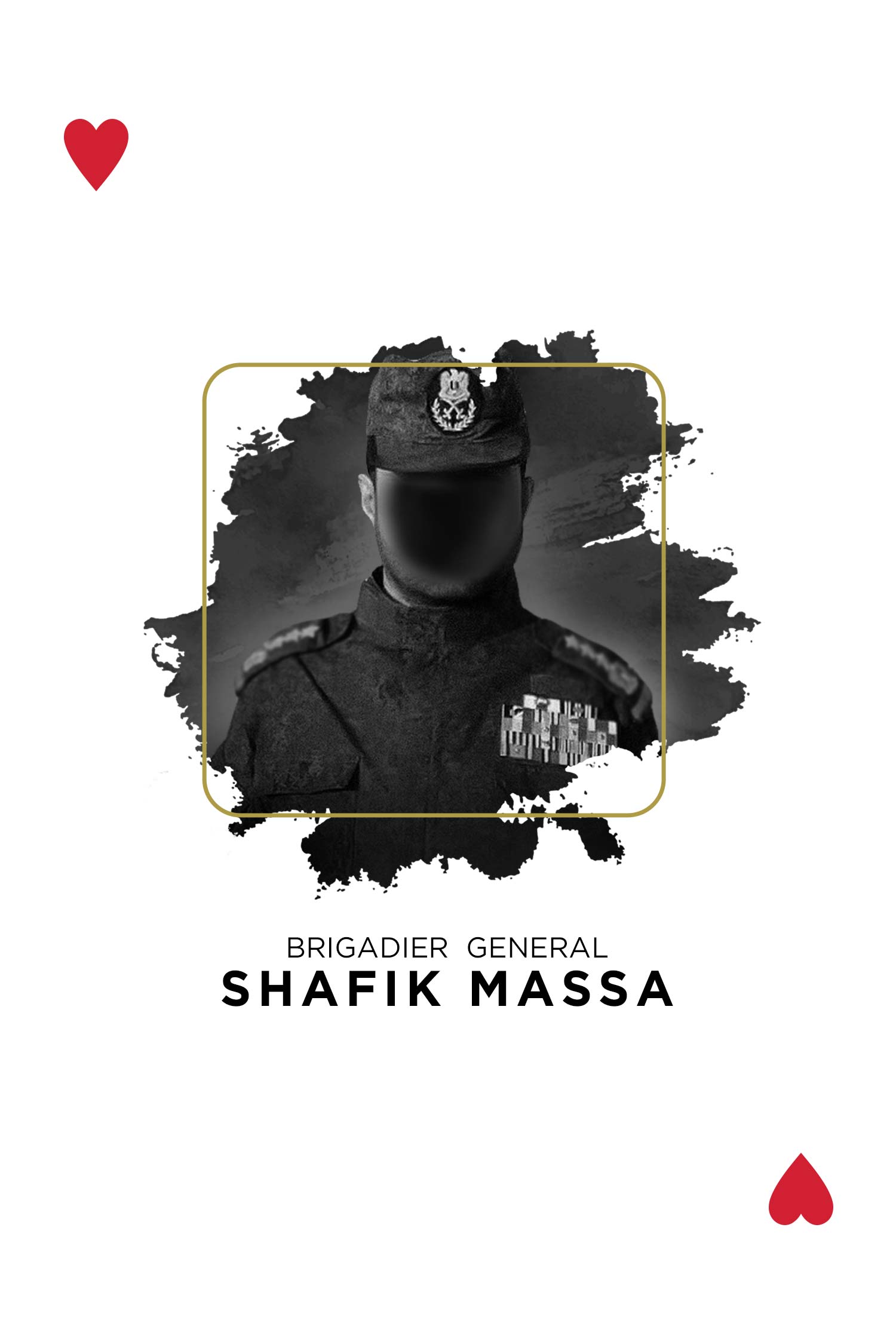 Shafik Massa was born in 1956 in the town of Zara, a predominantly-Alawite village in the southern suburbs of Hama. He joined the security services at an early age, excelling through the ranks to eventually become chief of the Branch 215 (“Raid Brigade”) of the Military Intelligence Directorate (MID), headed at the time by the late Assef Shawkat.

At the outbreak of peaceful protests in March 2011, Massa was a key orchestrator of the violent crackdowns on demonstrations taking place across Syria. From his office in the Kafr Soussah district in the capital Damascus, he oversaw raids and incursions by security forces in the neighborhoods of Damascus and authorized the indiscriminate arrest of civilians.

Under Massa’s command, personnel carried out the systematic torture of detainees, which led to the death of a large number of civilians within the walls of Branch 215. Throughout this period, Branch 215 became known by many as the “Branch of Death.”

Residents of the capital’s Dummar district faced a particularly heavy response by Massa’s forces; more than 1,200 detainees from the area are documented to have been killed in his custody. Thousands more have also faced detention, torture, and forced disappearance. The crimes of Branch 215 have not been limited to the neighborhoods of Damascus alone, but extend to other provinces such as Daraa, Aleppo, Homs, and areas east of the Euphrates, where residents were arrested for investigation and subsequently brutally abused – sometimes executed – by Massa’s forces.

According to witness testimony obtained from a survivor of Branch 215, around 25 detainees were killed daily from injuries obtained through torture, and their bodies were dumped in a section of the facility known as the “Death Ward.”

A report by the Syrian Network for Human Rights monitoring group quoted the experiences of 65 detainees who had been arrested and transferred to Branch 215. The victims described in detail the conditions of suffering and inhumane treatment carried out by Branch 215 personnel, which are believed to have claimed the lives of thousands of detainees.

Referring to one mass execution, survivors claimed that Massa had issued direct orders to terminate all detainees from an entire dormitory in response to the reported spread of a plague.

Violations taking place at Branch 215 were explicitly mentioned in a 2012 report1 by Human Rights Watch, which highlighted cases of torture and abuse in the first months of the crisis.

Former US Ambassador to the United Nations Samantha Power issued a statement on human rights abuses in Syria carried out by the Assad regime, including inside Branch 215. “Those behind such attacks must know that we and the international community are watching their actions, documenting their abuses, and one day they will be held accountable,” Power said, adding: “Today’s atrocities are well documented, and the civilized world’s memories are long.” She cited Branch 215 under Brigadier-General Massah as one of the facilities in which civilians were tortured to death.

Photo evidence documented by the Syrian whistleblower “Caesar”2 provided a cache of files pertaining to the three and a half thousand victims identified from Branch 215. The vast majority of victims recorded by Caesar were located within Branch 215.

Due to his role in the violent crackdown on civilian demonstrations and the abuses that ensued, Brigadier-General Massa was designated a sanctioned individual on British,3 European4 and Canadian5 lists.

2 Photo evidence of Branch 215’s victims can be found at: https://www.safmcd.com/martyr/index.php?id=2