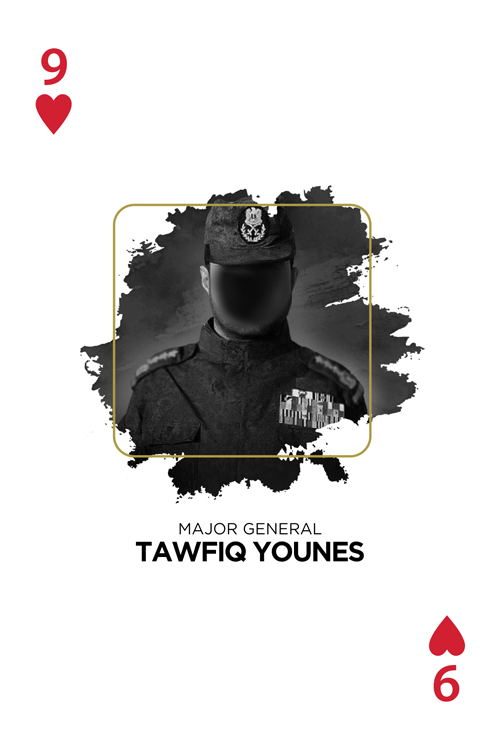 Major General Tawfiq Younes worked in the position of president of Interior Branch 251 in the General Intelligence Administration, known as the al-Khatib Branch, referring to the street on which the headquarters of the branch is located in Damascus between 2011 and 2016.

During this period, the branch under the administration of Younes came to have a fearful reputation in Damascus and its countryside, as its prison filled with detainees, against whom was practiced the worst forms of torture.

Likewise, members of the al-Khatib branch participated in the repression of protestors in Eastern Ghouta and the cities of Douma and Harasta, where hundreds of the inhabitants of those regions were arrested after the regions were stormed or through the branch’s checkpoints which were deployed in many locations in Damascus, even after he retired.[1] 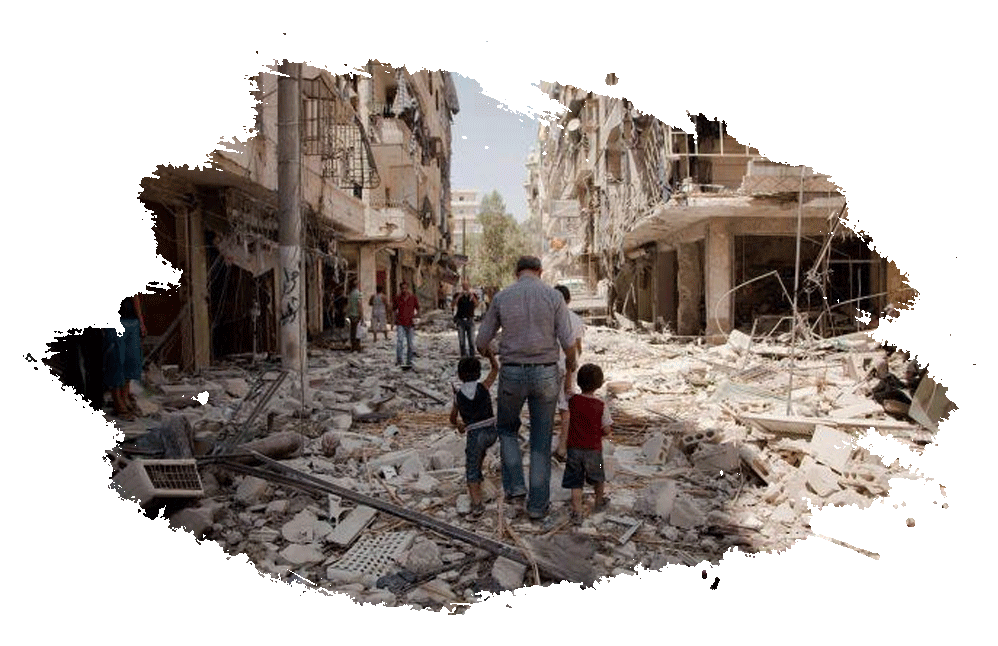 Major General Tawfiq Younes is considered responsible for all of the crimes and violations, especially cases of enforced disappearance that took place during his leadership of the al-Khatib branch, as the testimony of survivors of the branch claims that horrifying crimes were committed against detainees, including the practice of the worst forms of torture in the women’s cells, including systematic rape by the members of the branch.

One former detainee described the situation in al-Khatib branch by saying that “The al-Khatib interior security branch, or Branch 251, is reputed to be one of the most squalid Syrian military branches, and it is a living example of all of those practices in prisons, in this branch – as liberated detainees have related – you cannot see its floor, because it was covered in a layer of blood, and flesh was falling from detainees from each torture session.”

A 2012 Human Rights Watch report entitled “Torture Archipelago: Arbitrary Arrests, Torture, and Enforced Disappearances in Syria’s Underground Prisons since March 2011” discussed horrifying violations in al-Khatib branch, quoting a former detainee called “Bassam,” who said: “I was subjected to interrogation twice. The interrogation cell was on the second floor. We would be hit by everyone while we were on the way to it, and we were still blindfolded, and during the interrogation I sat on my knees. They punched and kicked me, and it was more of an accusation than a questioning, in the legal way of ascending, since the detainee who could climb the steps fell down them and was cast on the ground.”

The report likewise reports on a former detainee, “Marwa,” who said, “We heard night and day the voices of men being tortured, there is a person who assisted with organizing protests whom they forced to stand on his knees while being held in the cell, and during the interrogation they would threaten me with having my clothes taken and torture on the dawlab. We didn’t know what time it was, so we didn’t know the time of prayer, we weren’t able to sleep because of the sounds of torture. The other woman with us in the cell told me that they struck her multiple times and kicked her in the stomach. I saw security forces striking an adolescent who seemed to be 12 years old in the hall. They also coaxed him into saying that he saw us in a protest, and I swore that he had never seen us before, but they believed him. The cells were close to one another and there were holes in the door that I would use to see what was happening outside.”

A report from the Center for Documenting Violations in Syria on the violations committed in the al-Khatib branch, a former detainee called “Samir ‘Abd al-Samad Hussayn Karami” transmitted details on the tribulations of detention and the kinds of torture faced by prisoners, and their deprivation of the most basic necessities of life, which some detainees lost under torture (dozens of photos leaked by Caesar)[2] in Department 40 of al-Khatib Branch as a result of the practices of its members against them. It notes that Bassam was later transferred from Department 40 to the al-Khatib branch, and was able to act as a witness of the practices of both the department and the branch. 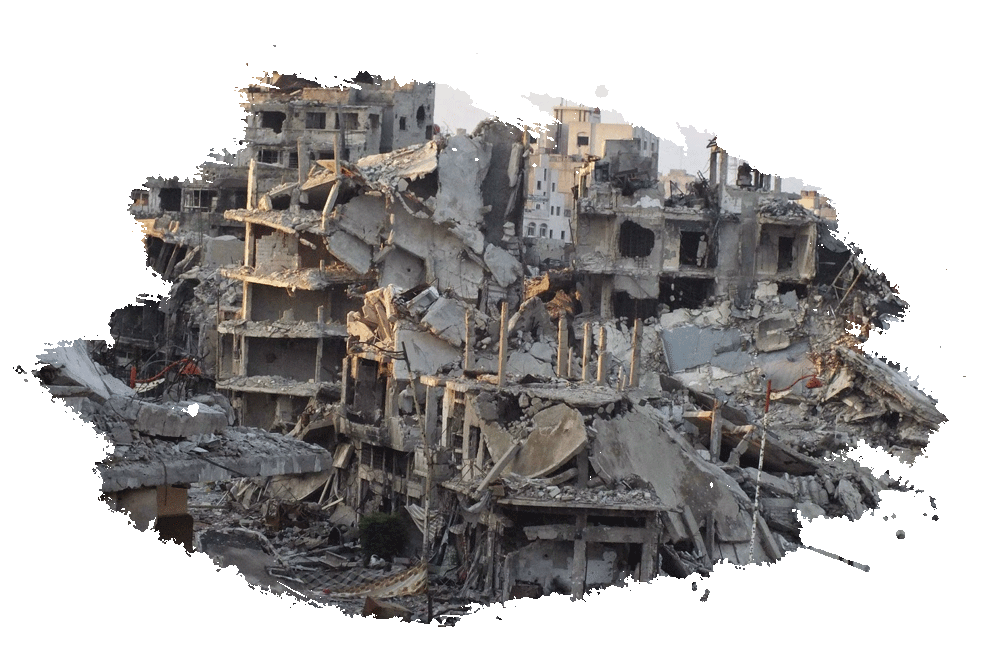 A Human Rights Watch report published on December 15, 2011 entitled “By All Means Necessary! Individual and Command Responsibility for Crimes against Humanity in Syria” discussed Internal Branch 251 of the General Intelligence Administration, relaying testimony by a security soldier who defected at the beginning of the revolution called “Fahd al-Hamid,” that talked about the styles of torture followed at the branch, saying, “The means of torture displayed at the beginning of the revolution between shocks with electricity, enforced starvation, pumping cold water, located in the clinics close to places specialized in dealing with the dead bodies of detainees, as licensed doctors were providing medical reports based on the instructions of the security forces, suggesting that generally the detainee faced a critical heart attack and was given an electric shock to save him that cost him his life.”

According to Fahd al-Hamid, torture, interrogation, and killing was entrusted to members of the Alawite sect because the [regime] had lost interest in Sunnis, clarifying that he had personally faced prison for two months under the accusation of empathizing with detainees. He described the torture as being extremely harsh, and the instructions to interrogations was to get information from the detainee by any means possible, including through the “flying carpet,” electric shocks, beatings, and starvation, and he confirmed that the accusations directed at children were always related to joining rebels, and the goal of torturing them was to extract confessions from them.

As a result of these horrifying violations that took place under his direct supervision, Major General Tawfiq Younes was placed under European,[3] British,[4] and Canadian[5] sanctions because of the convincing evidence of his criminal practices against Syrians.

[1] Crimes against humanity do not have a statute of limitations.

[2] Photos (18+) of a number of detainees who met their deaths in Branch 251 under the leadership of Major General Tawfiq Yunes.