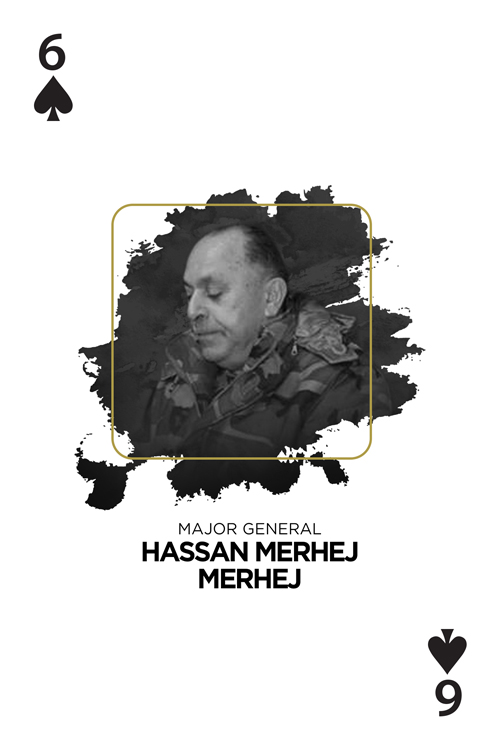 When the peaceful protest movement erupted in March 2011, Hassan Merhej was commander of the 33rd Tank Brigade under the Ninth Division, deployed near the city of al-Sanamayn in the northwestern Daraa countryside.

His brigade participated in military actions carried out by the Ninth Division in Daraa, with members of the 33rd Tank Brigade and their leader—Hassan Merhej—carrying out a number of massacres in the province.

On 11/5/2011, the 33rd Tank Brigade stormed the town of Jassim along with brigades from the Ninth Division, Seventh Division, the Special Forces, and Republican Guard. The operation killed 31 civilians, including six who were killed directly by 33rd Brigade fighters. Fighters from the same brigade, under the command of Hassan Merhej, also occupied the city hospital and converted it into a military barracks and temporary prison, which resulted in the deaths of a number of wounded and ill people due to medical neglect.

The 33rd Tank Brigade’s participation continued in storming many cities and towns in Daraa throughout 2011 under the command of Hassan Merhej. In July, members of the brigade stormed the town of al-Sanamayn. They also stormed the city of Jassim again on 20/10/2011, which killed and wounded more than 150 civilians from among the city’s residents. A number of the brigade’s fighters were also dispatched to storm the Baba Amr district at the end of 2011, which destroyed the district and killed and displaced its residents.

On 18/2/2012 the 33rd Tank Brigade moved to the central region (Homs and Hamah) in accordance with the mobilization order (No. 6359/502). A military convoy with 63 tracked vehicles and 35 cars with ammunition allocated for personnel and equipment was moved. When Hassan Merhej arrived to the central region, a new series of horrifying violations began against civilians. He stationed the 33rd Brigade near the town of Kafr al-Tun in the northern Hamah countryside, and began to strike the province’s villages with his tanks.

Hassan Merhej—whose rank was brigadier general at the time—participated in carrying out a number of massacres, most prominently the al-Qubeir massacre in June 2012, when the village was stormed by the following forces: the 33rd Brigade, the 555th Regiment in the Fourth Division, Air Force Intelligence, and the National Defense Forces. Men, women and children were fired upon indiscriminately, and a number of men were brought outside their homes and slaughtered with knives and bladed weapons. Ten bodies were burned and 37 other bodies were taken. They killed everyone they laid eyes on, with no one surviving the massacre except two women, three men, and a two-year-old child. The number of dead whose names were documented was 78, including 22 children, as well as about 10 dead whose corpses were burned and could not be identified. About 15 also went missing, and their fate is unknown, including women and children.

Hassan Merhej also participated in military operations which resulted in the al-Tremseh massacre in the northern Hamah countryside in 12/7/2012, which killed 305 people and wounded more than 300 people. Members of the 33rd Brigade opened fired with Shilka vehicles, tank shells, and heavy machine guns on the town of Tremseh, striking its school and its homes. Regime shabiha from the adjacent Alawite villages also carried out massacres by surrounding the civilians who tried to flee toward the farmlands and killing them in cold blood. Militias led by Colonel Suheil al-Hassan stormed the town to finish off the wounded and arrest those residents who remained.

While commanding the 33rd Tank Brigade in the central region in 2012, Hassan Merhej also carried out a number of other massacres in the following areas: Murak, Souran, Taybat al-Imam, al-Tamanah, Tell Malah and the surrounding villages and farmlands. These killed hundreds and forced tens of thousands to flee their homes.

Perhaps the worst of these operations was the al-Lataminah massacre (7/4/2012), when the town was surrounded and bombarded and then stormed with armored vehicles and military equipment, killing about 70 civilians. Of these, 51 were documented, while 20 corpses could not be identified because they had been burned. There was also the Souran massacre (20/5/2012), which killed 34 civilians at the hands of fighters from the 33rd Brigade, after the city was stormed under the command of Hassan Merhej and Major General Wajih al-Mahmoud, head of the Military and Security Committee in Hamah, when their tanks opened fire indiscriminately.

In 2014, Hassan Merhej participated in the massacre of Maarzef in the Hamah countryside, which killed 10 people, including three women and six children, as the result of the town being struck with artillery and tanks.

As a result of his bloody record in the regime’s service, Brigadier General Hassan Merhej was promoted to the rank of major general in 2015, and he was given command of the Eighth Division—the 33rd Tank Brigade is one of its brigades. At the end of July 2016, Major General Hassan Merhej was promoted as commander of the Fourth Assault Corps following Major General Shawky Youssef, and was also appointed head of the Military and Security Committee in coastal Syria. There, he participated heavily in the violations committed in battles in the Latakia countryside and Aleppo in the second half of 2016, which in the end resulted in the regime taking full control over the city. Major General Hassan Merhej is considered to be a partner in these crimes, while he also participated in the battles which occurred in the northern Hamah countryside in the months of March and April in 2017.